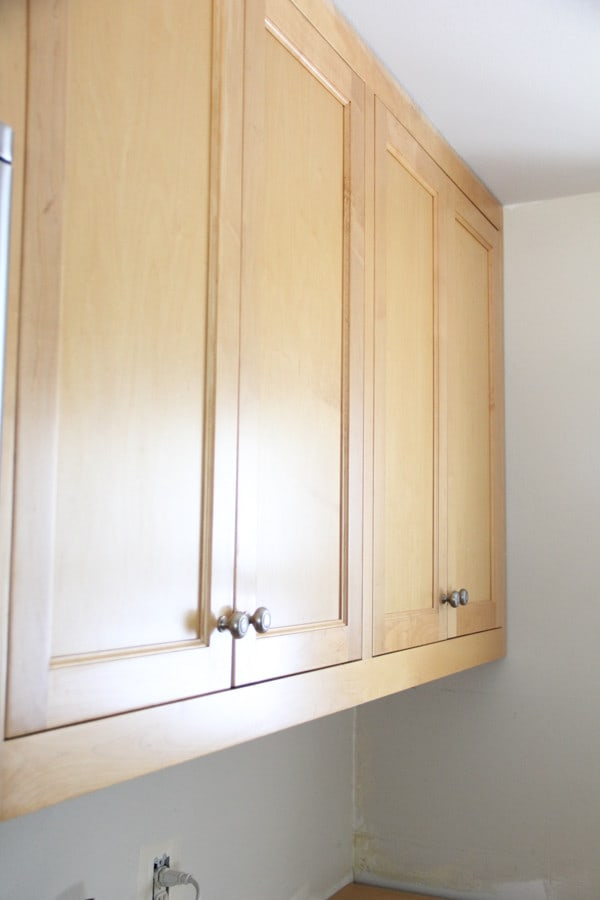 A few months ago we were still living in the Auction house and we were under contract on the Retro Ranch. I knew that the kitchen needed some major updating, and didn’t think that the cabinets were nice enough to paint them. The kitchen also had an awful layout and it didn’t include a dishwasher. 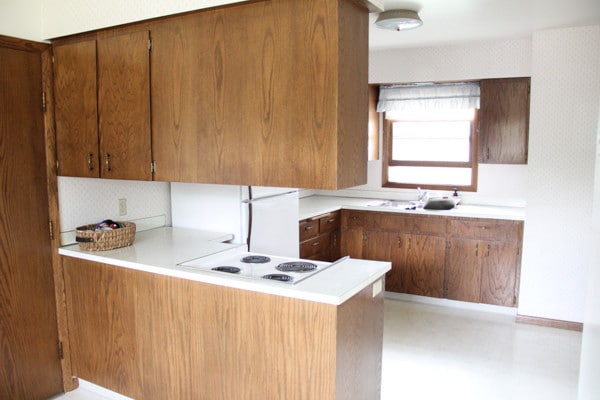 I started perusing Craigslist of our neighboring states and came across a listing for a set of cabinets in Edina, MN.

After a few weeks of hunting, I found exactly what I was looking for: Craigslist Kitchen Cabinets. This was the listing pic, and it said that for $1000 and the effort of getting them removed they could be ours. I didn’t have the exact measurements of the Retro Ranch’s kitchen, but the layout looked very similar and it almost seemed too good to be true. 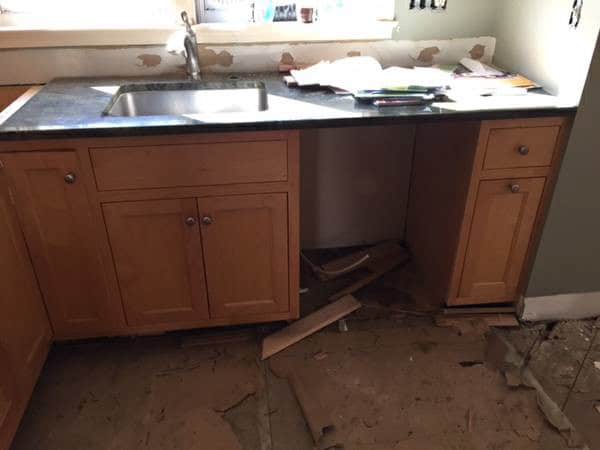 After going back and forth with the seller, my dad agreed to take his trailer and travel the three hours to the Twin Cities to remove the cabinets for us! I was VERY afraid he would get there and there would be something terribly wrong with them. Or that we would eventually get them to ND and they wouldn’t fit! 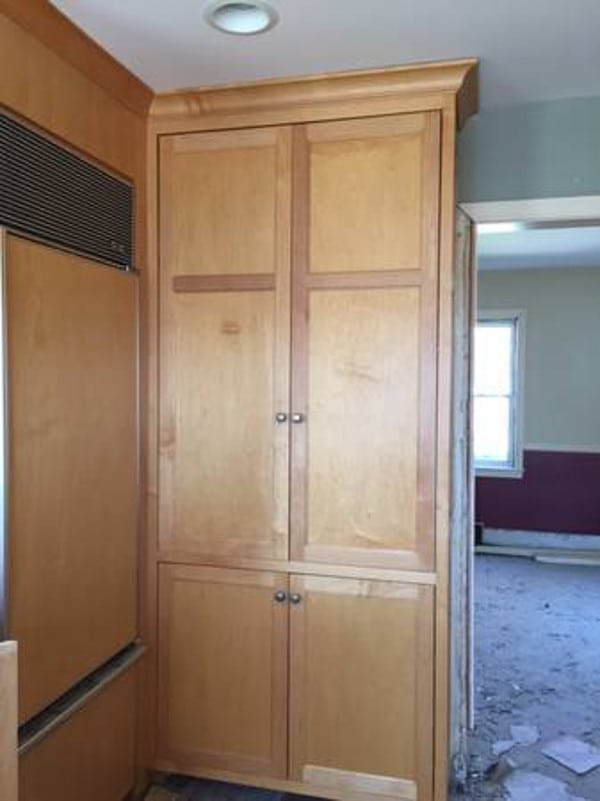 So my dad and brother-in-law headed to the Craigslist house and they were as nice as they looked! The house they were in was being torn down, so they had two days to remove everything before the demolition crew was arriving! While my dad was removing them, storing them, and hauling them up to North Dakota, I was busy demoing, drywalling, and prepping the old kitchen. 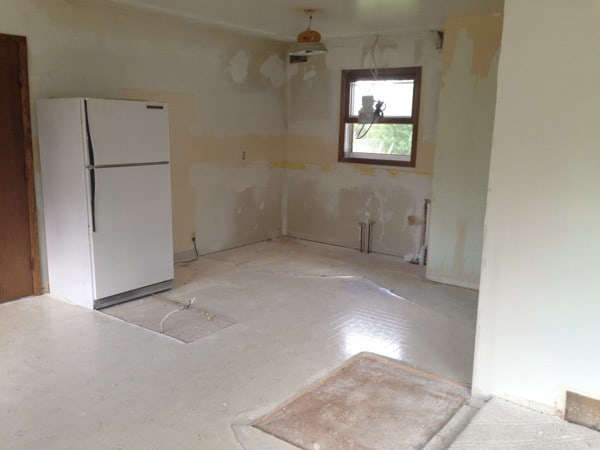 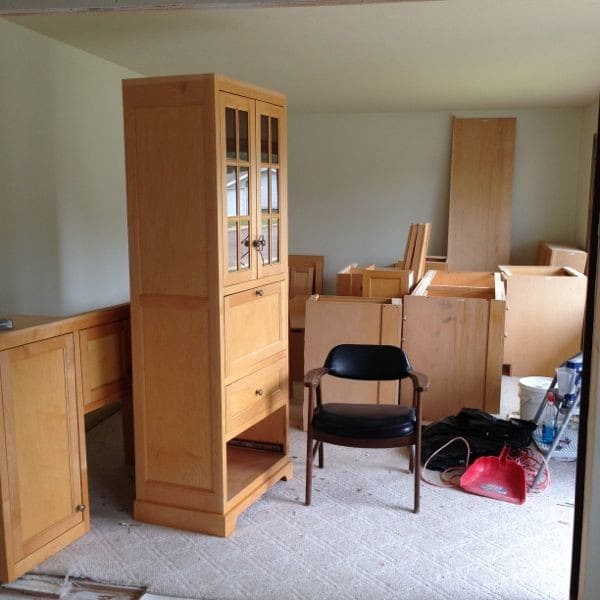 The day he arrived with the cabinets we got to work installing them, and miraculously they were a pretty awesome fit! Of course we had to do some tweaking, but I LOVE the way they fit into the kitchen. 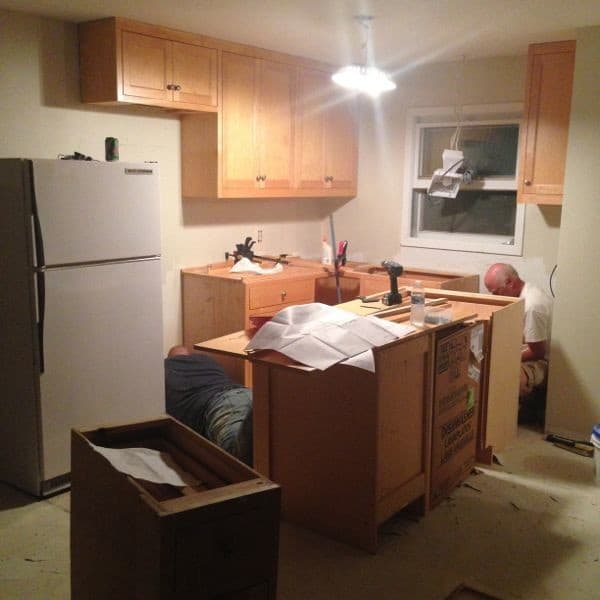 I thought that I had our layout figured out, with the dishwasher going into the island and the small sink cabinet under the window. That was until I realized that we could cut apart the sink cabinet from the corner cabinet and shift the larger cabinet over to the left. 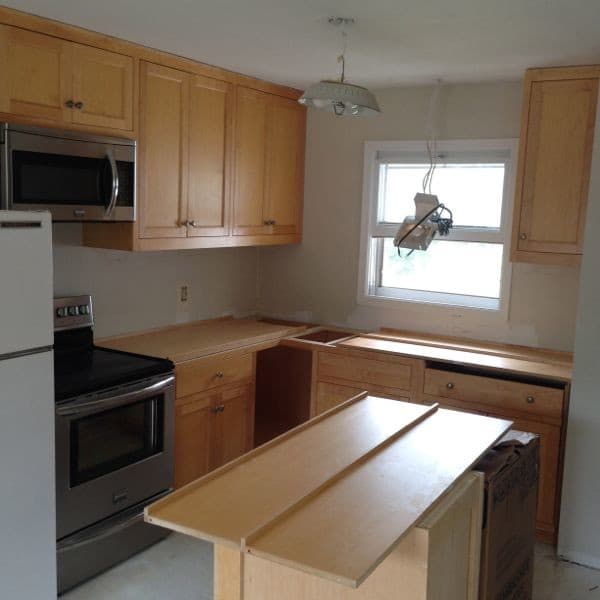 So just as we thought we were done I started cutting and adjusting, and made room for a larger sink, and created enough space to put the dishwasher next to the sink. 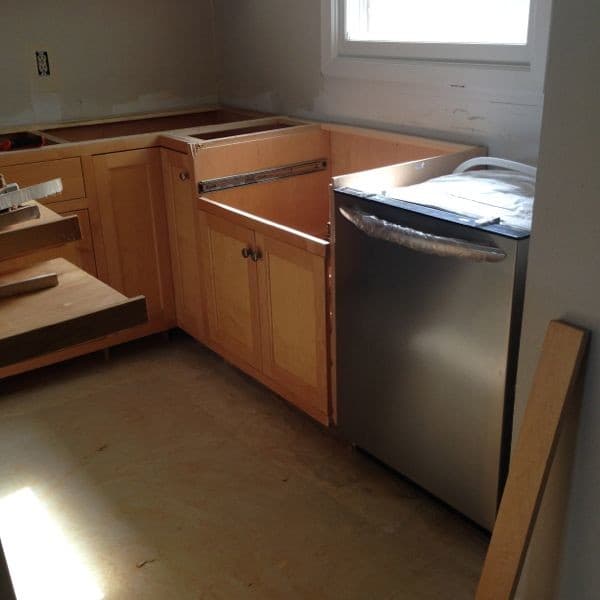 When our fridge arrived I had a moment of panic thinking it was too big for the kitchen. Thankfully though we’ve got lots of leftover cabinet pieces so we are going to have a cabinet maker build us a cabinet for above the fridge with the leftovers. Hopefully once that is in place it will make the fridge look like it belongs.

There isn’t enough space to do an island with an overhang, so we are going to do an overhang off the end for just two stools.

I decided to go with a large undermount stainless sink and I totally love it. It’s nice and deep, and after not having a kitchen sink for almost a month it is WONDERFUL to have a sink again! 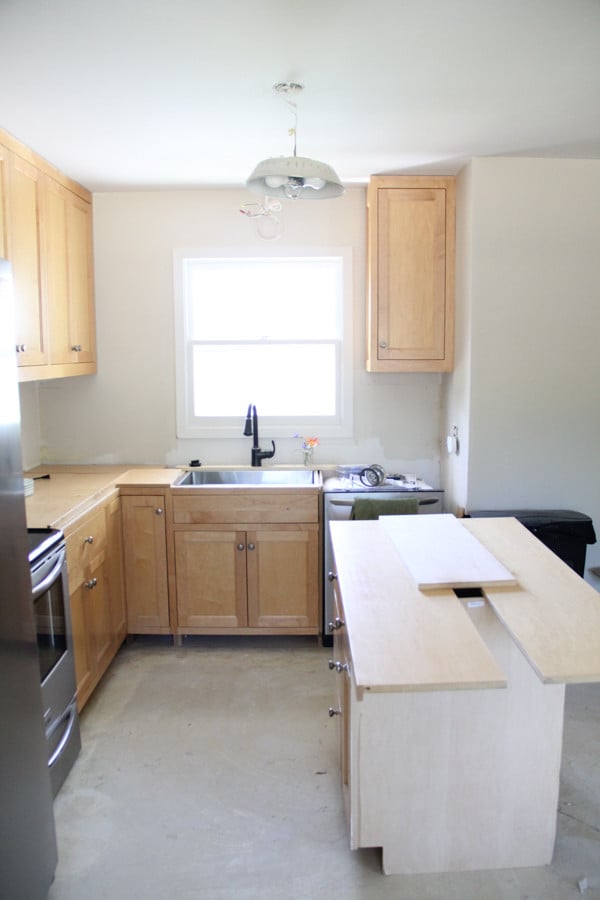 We still need to order countertops, as well as change out the knobs and lighting, but I LOVE the way the kitchen is coming together! 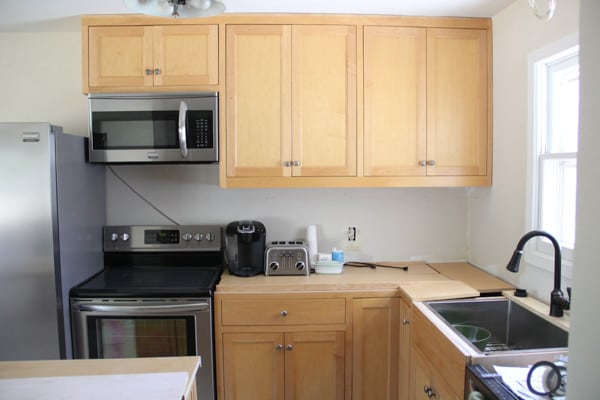 I’ve even got my first cup of wildflowers from the boys on display! 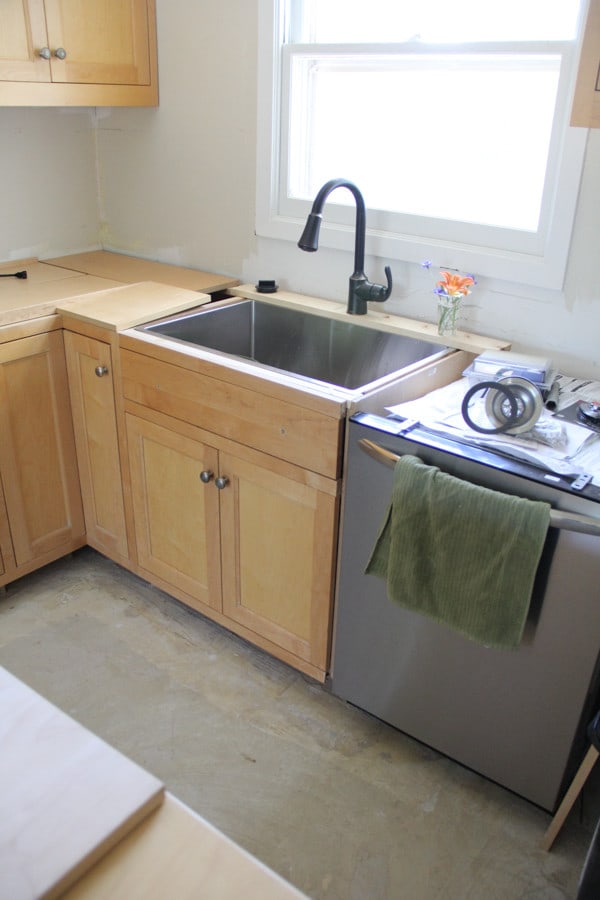 I love how bright and clean and Scandinavian they look! 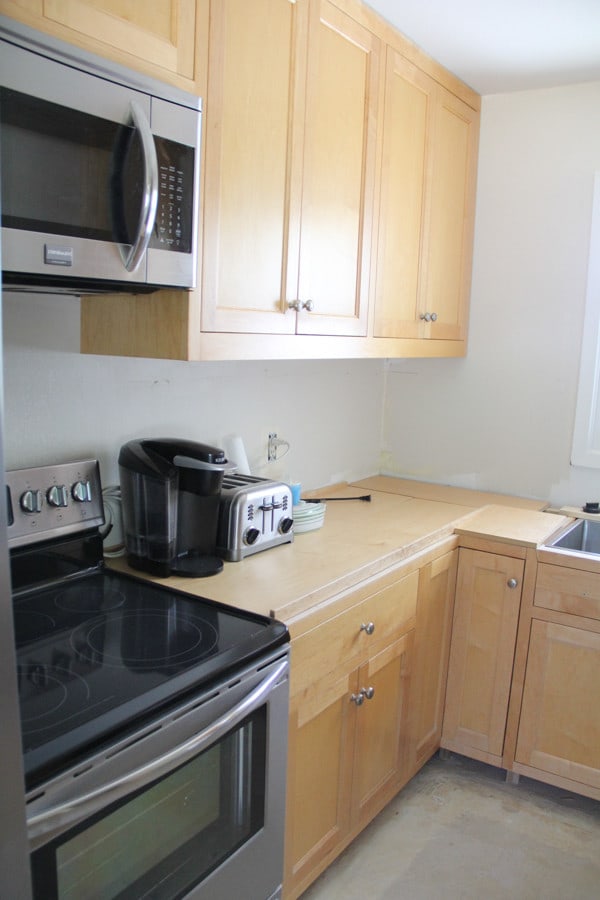 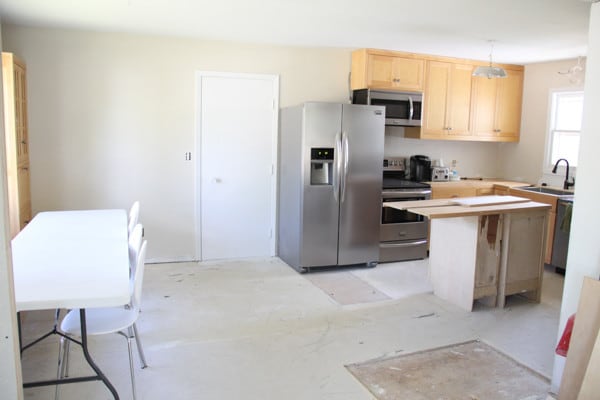 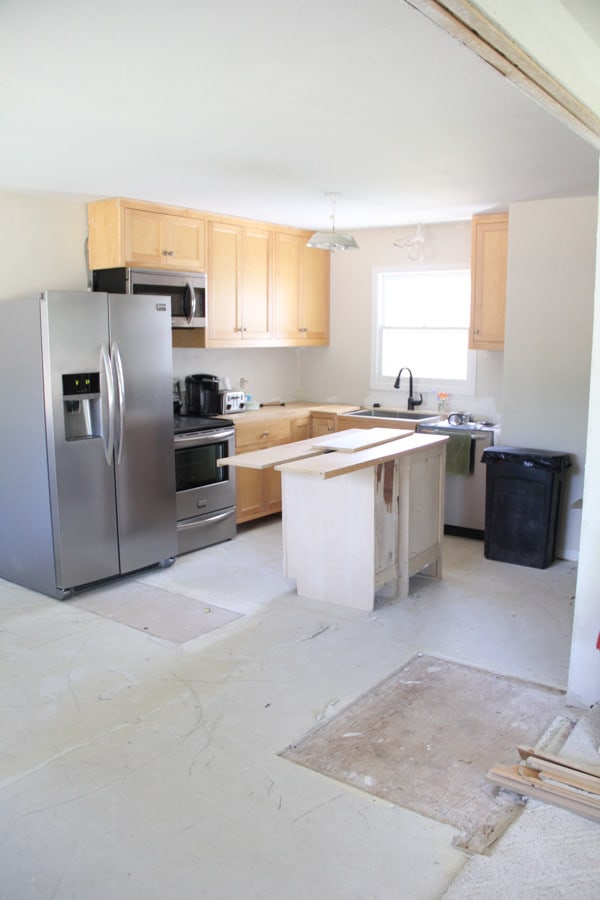 We ended up with quite a bit leftover. I’m hoping I’ll be able to use these pieces to build in the dishwasher and trim out the bench. 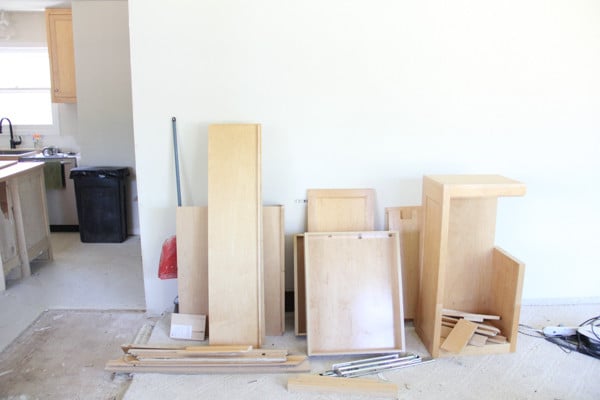 Yes, we even got a bench and hutch out of the deal! 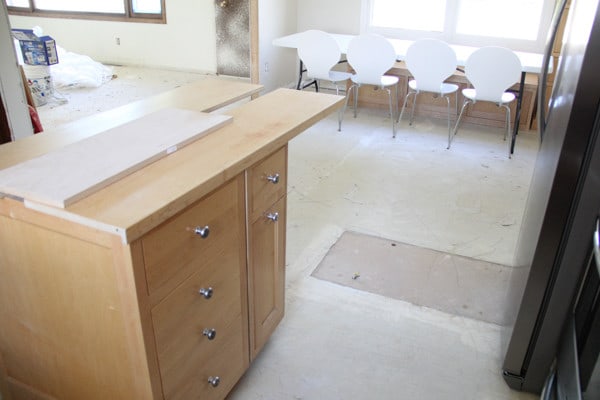 I’m still trying to decide what to do on the other side of the bench, but I like how it creates more storage and ties in with the rest of the kitchen. 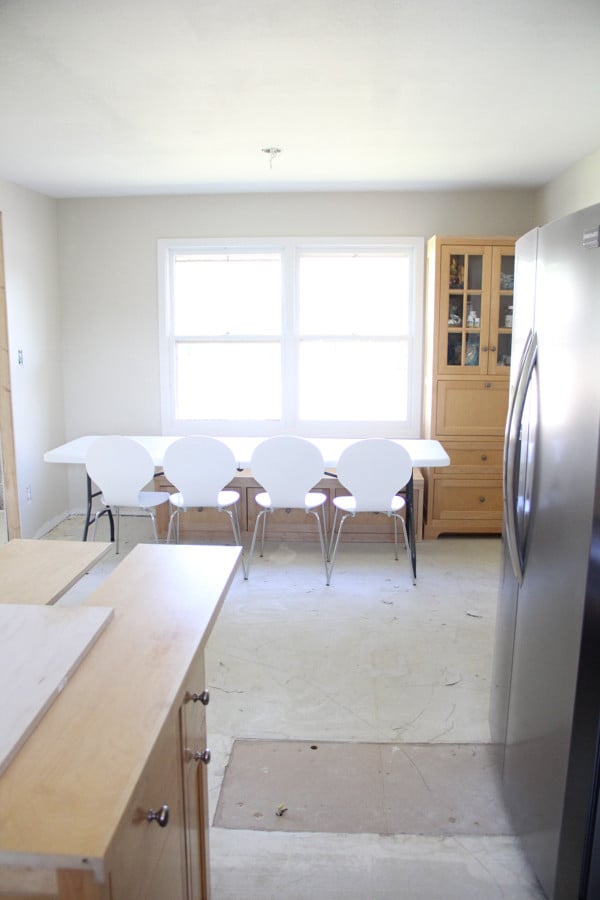 So if you’re looking for affordable kitchen cabinets, don’t look past Craigslist! You might just find another gem!

**UPDATE** To see how this kitchen turned out, head to this post!