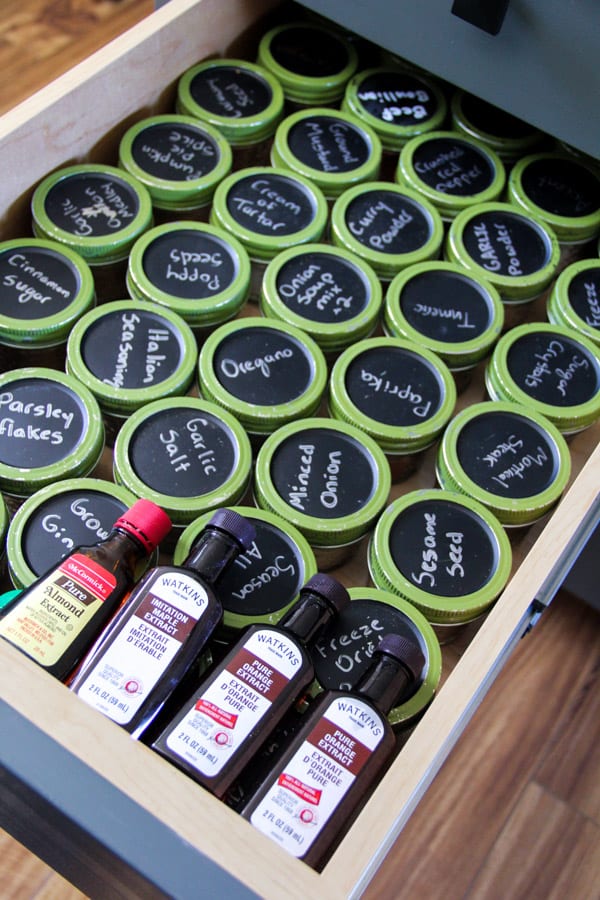 Have your spices ever looked like as much of a disaster as mine used to?! Every time I needed one it resulted in a frustrating mess. I had no organizational system and everything was always a disaster. I was in need of a serious spice organization solution. 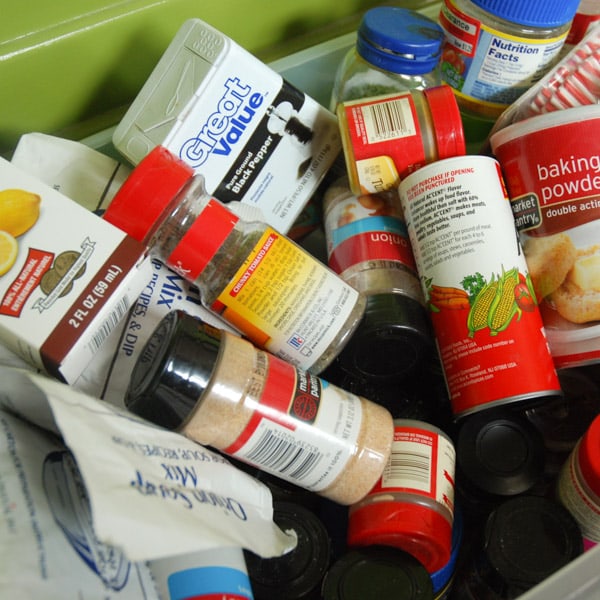 I came across this pin and knew that I absolutely HAD to organize my spices like she did. I loved the idea of freeing up a cabinet and storing them in a drawer where I could easily see them all. In our house cabinet space is always in short supply, but finding a free drawer has always been easy. 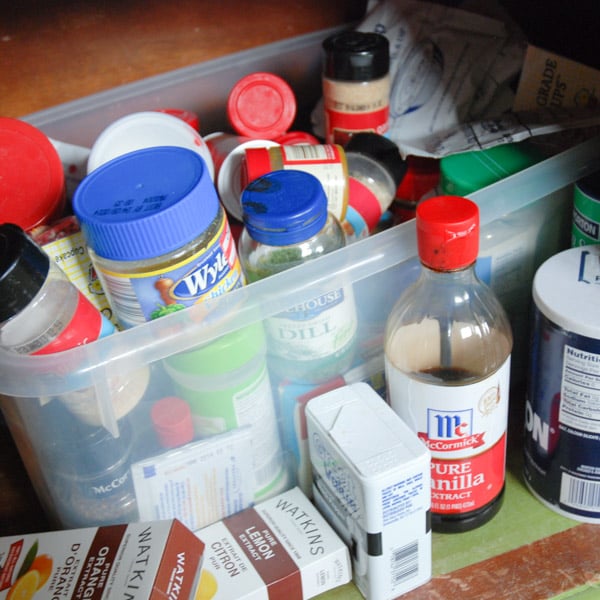 I actually completed this project over three years ago, but I am re-sharing it because it has been so life-changing! My photography has also gotten significantly better and I sort of cringe at those old blog posts! Seriously, they’re filled with good ideas, but it’s nothing anyone is going to willingly pin because the photos are SO bad. Let’s just say the blog has come a LONG ways. If you don’t believe me just look at the oldest projects in the project gallery.
OK, off of my horrible photography tangent. What I was leading to is that three years later my spice drawer looks remarkably the same as when I finished this project. Since then these spices have lived in two more houses, but they’re still almost as organized as they were the day I organized them. 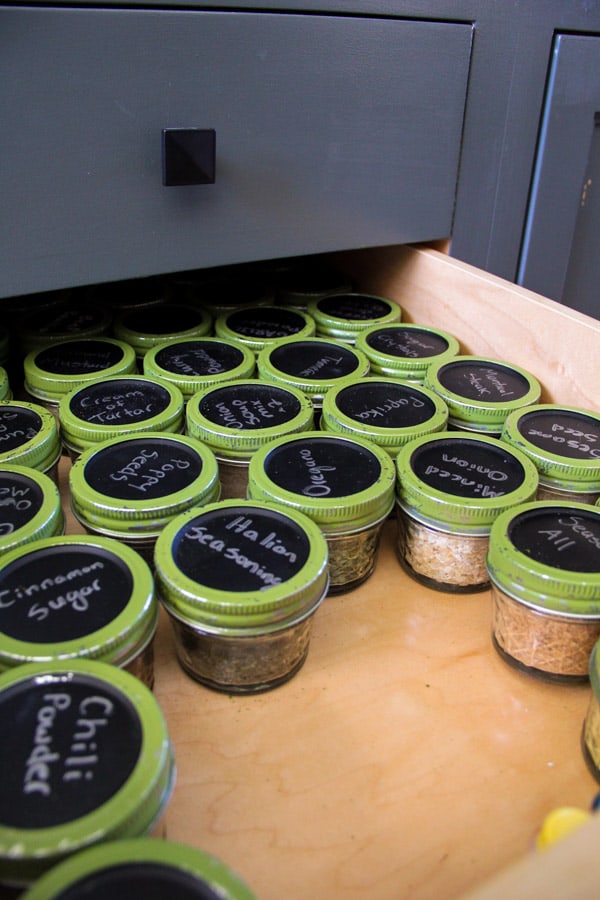 So here’s what I did: First I grabbed some mini mason jars off of Amazon *contains affiliate links*. These are so tiny and cute that I could see using them to organize lots of different things. Or if you store spices in bulk you could easily purchase the larger lars. 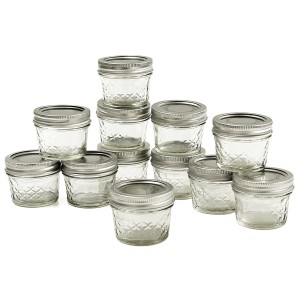 I simply spray painted the tops black, and the rims green. Then I used a white sharpie to label each container. This way they get the chalkboard effect, even though they’re not really chalkboards. I didn’t use chalkboard paint because I was afraid that my labels would accidentally get erased and I wouldn’t remember which spice was which! If you’re brave chalkboard labels could be fun! 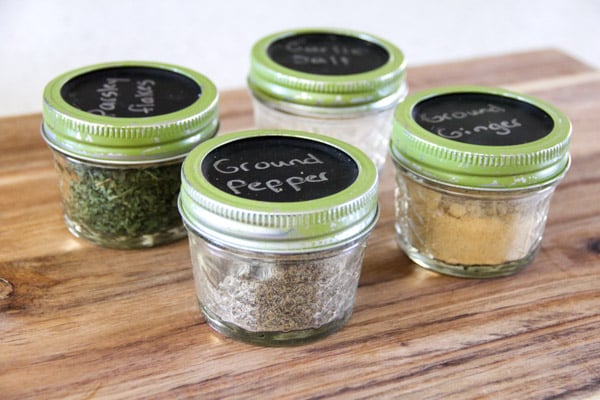 In all honesty this project could be accomplished without any paint at all and just the jars and a sharpie. After painting them all and letting them air out, I spent an afternoon pouring various spices into containers. I made a few extra containers and in the three years I’ve had my spices like this I’ve only added three different ones to my collection. If you do this I recommend leaving a few blank in case you want to build your spice assortment!

Occasionally I alphabetize them all, but really it’s not necessary. It’s pretty easy to just scan and look for each one. I seriously have a little burst of happiness when I pull one out in seconds, versus the anger-inducing frustration I used to have when trying to find spices! 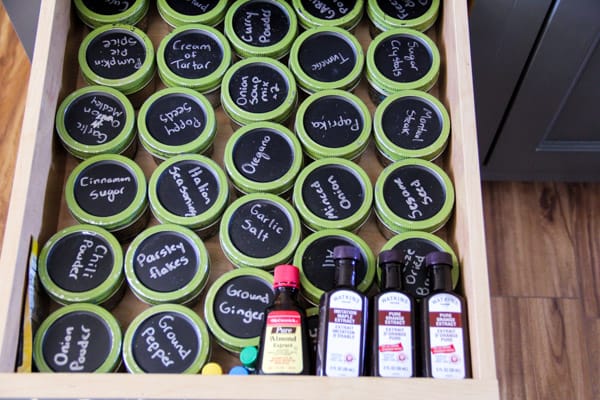 Matt’s just happy I am not throwing the bin of spices around in my anger during dinner prep. I also love that these fit so nicely into any drawer.So did I inspire you to go and organize your spices? Or do you have a foolproof method for keeping them organized?
*This post was originally posts 3/27/13.. as stated in the post it was time to share an update and some better pictures!**