Shortly after moving into our house I decided to go out and trim the evergreen shrubs that had overgrown onto the sidewalk. I trimmed, and trimmed, and got out the lopers, and the axe, and pretty soon most of the shrubs were gone! What I realized was that when you don’t trim back evergreens for years and years you get thick, branchy, moldy bushes. YUCK. So I decided to just make it right with our landscaping and completely pull the shrubs out. Well, Matt made it right by axing the roots and pulling them out with our Tahoe!
Because the landscaping was completely unplanned and unbudgeted (sp?) I took no before pictures at all. Here was the listing photo taken in the fall: 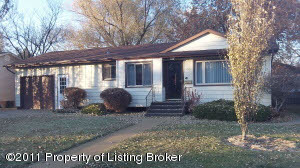 and one close up to prove how far onto the sidewalk the bushes were: 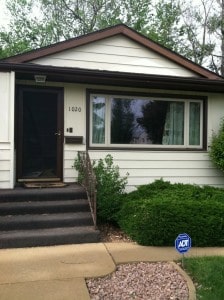 and a few pictures I took halfway through the hacking: 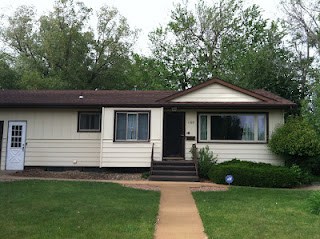 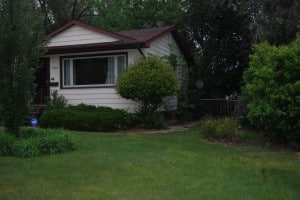 and the driveway when it was all said and done.

Two backbreaking days later we were down to a clean slate!

Actually if you look really really close I forgot to take a picture of the clean slate, this one was with our newly planted shrubs tiny little plants. We planted five boxwoods (3 on the left, 2 on the right), and two White Salvia next to the sidewalk.
A few weeks later (and some green paint on the door) you can see our little plants starting to grow! Hopefully it won’t look barren too much longer! 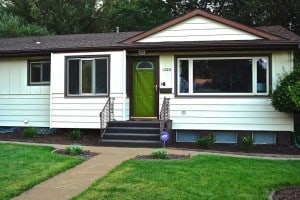