Can you believe it’s already a full week into the New Year?! I’m participating in the “New Year New Room Challenge” hosted by Stephanie of Casa Watkins Living. This year I’m making over our master bedroom and I wanted to share our progress from the week! I also wanted to give ALL the details on our Ikea Pax wardrobes. 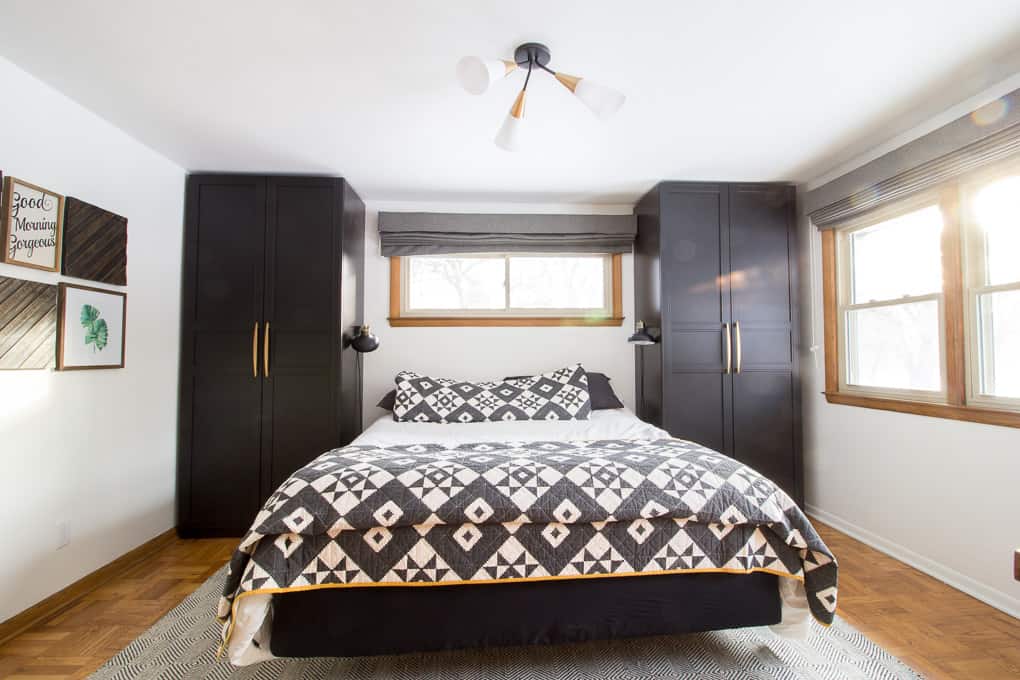 Moving into this house meant downsizing quite a bit from our last house. We had two large master closets, here we only have one small closet in the master bedroom. We knew we’d have to get creative for storage and that’s when I decided to bring in two Ikea Pax wardrobes. 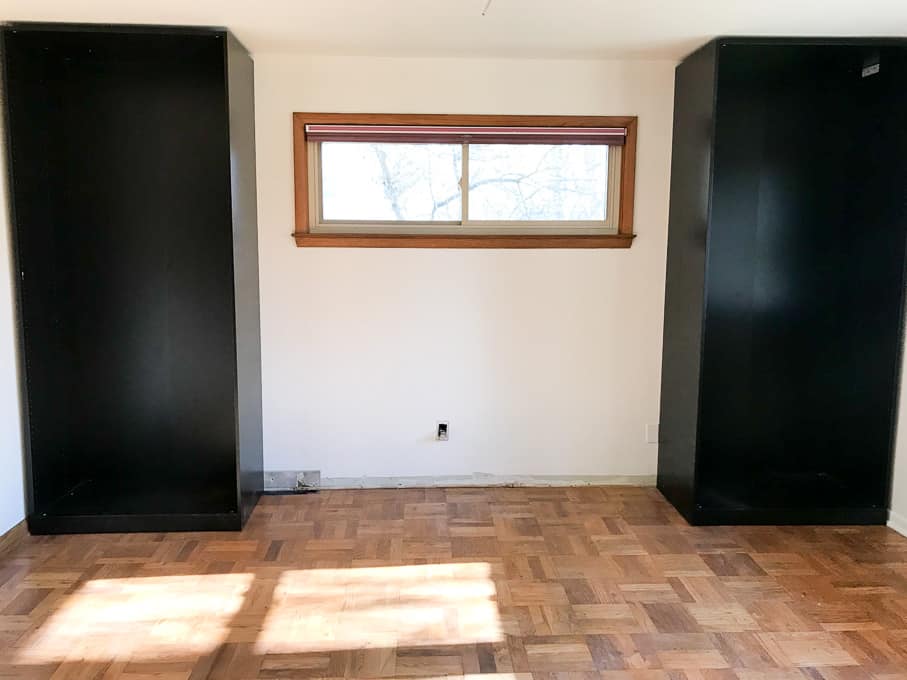 Ikea sells these wardrobes in a few different sizes and heights. We went with the 39 3/8″ width and 93 1/8″ height. This made the most use of the spaces on the sides of our bed. They come in either white or black and I chose the black to give our bedroom the moody look I was going for. They sell TONS of different doors. I went with the “Flisberget” door, mainly because of it’s bargain price of $50 each, compared to the Hemnes door which was $11o each. 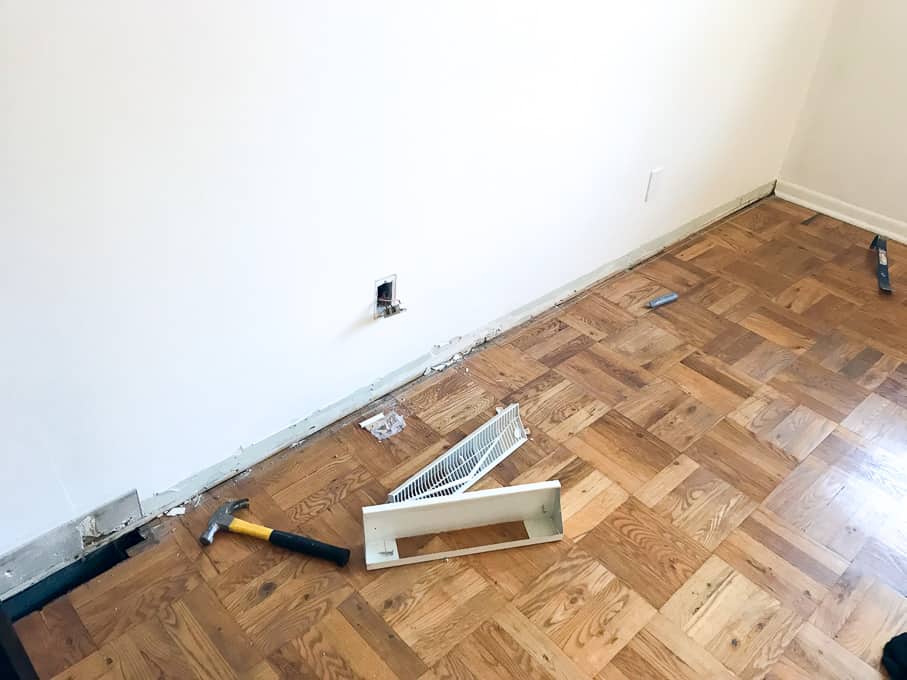 Building and installing the wardrobes would have been much easier with two people, but I managed to do it alone. Alone it took me about five hours which included the doors and the storage systems on the inside. I started by removing the trim and heat vent so that the wardrobes would sit flush against the wall. After building the cabinet I was sure to secure it to the wall. I still need to add a piece of trim back here and re-install the vent cover. 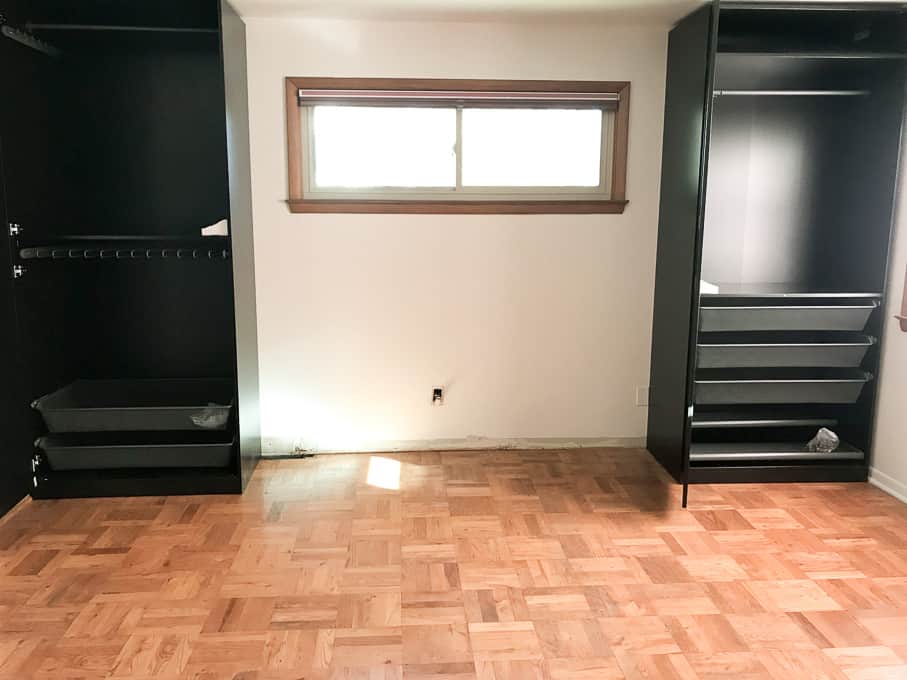 We went with different arrangements for organization due to our different needs. I wanted shoe and storage baskets, my husband wanted more room to hang his clothes. In total we spend about $600 on the two cabinets, 4 doors, and interior storage systems. This was during a sale and with a coupon. To determine the right layout I just played around with the Ikea Pax Planner until I had a setup I liked. 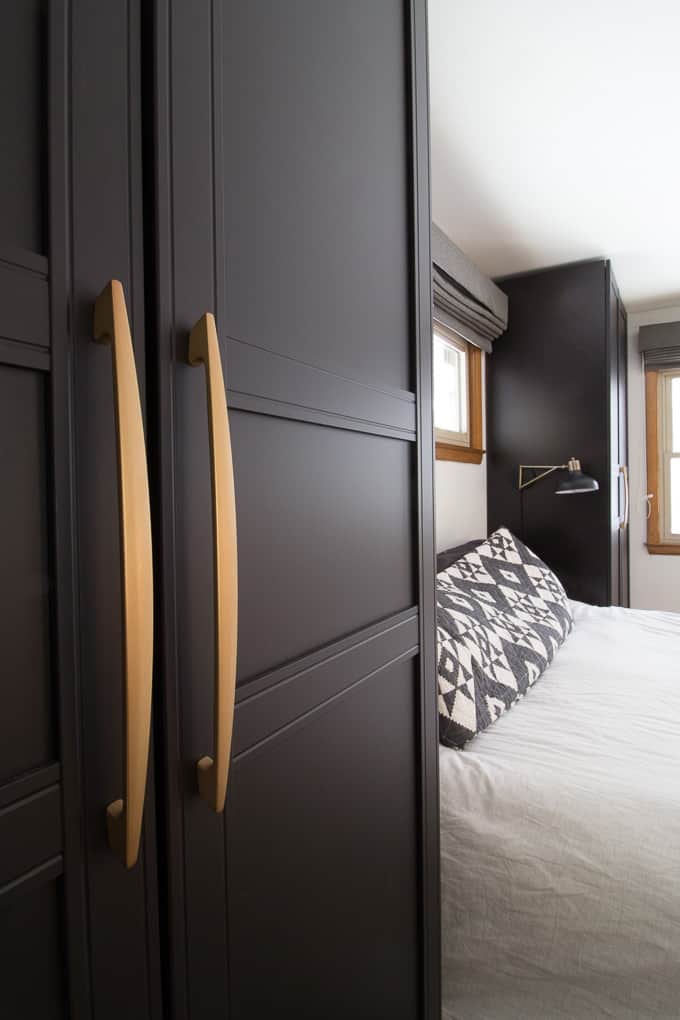 These don’t come with pre-drilled holes so that you can put whatever hardware you’d like on them. We went about a month without hardware which meant we had to open them from the bottom. Just this week I added these gorgeous pulls that totally make the wardrobes complete. **post contains affiliate links**

Along with completing our wardrobes, we also added our new Blindster Roman shades this week! A HUGE improvement over the prior maroon mini blinds! They’re the Plain Fold Roman Shades in the fabric “Tulum Graphite”. One thing to take note of is that we had to shift the right wardrobe away from the wall so that the door could clear the roman shades. We could have avoided this with inside mount shades, but then we would have had three individual shades instead of one long one. 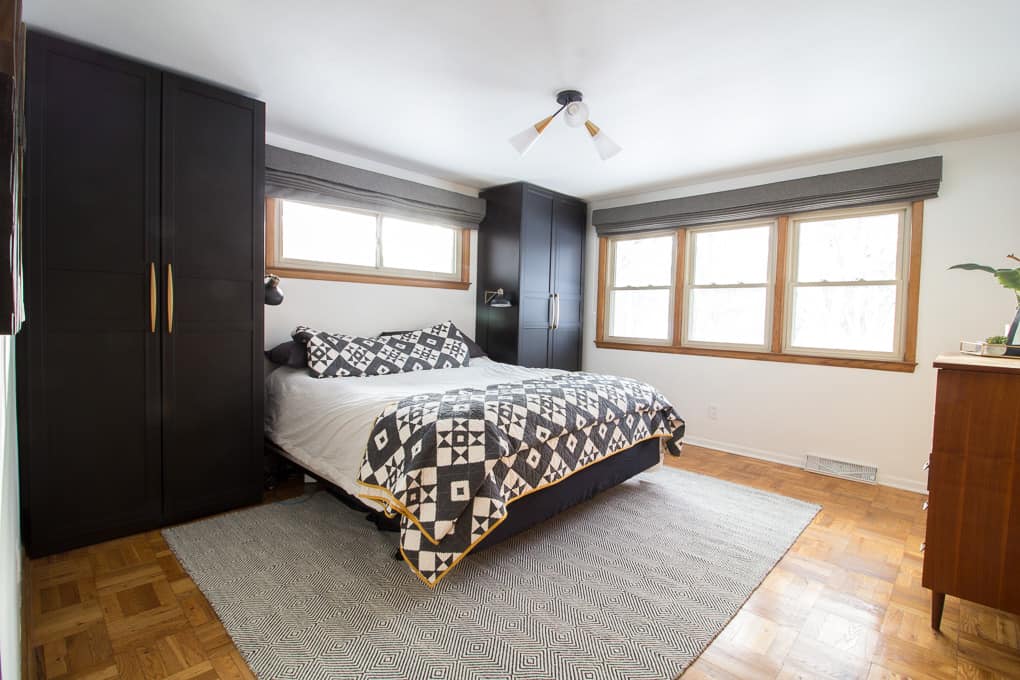 Remember how last week I said the rug would definitely be staying?! Well in one short week that all changed. This quilt arrived which I fell TOTALLY in love with. The problem is that it really didn’t work with the prior rug. So I played musical rugs and stole this rug from the boys bedroom. (Sidenote: Musical Rugs is NOT a fun game to play alone on a Monday afternoon). You might notice it’s the same rug we have in our living room but in different colors!

So that’s where we’re at! New rug, new quilt, new roman shades, and new hardware on the wardrobes. I’d say it was a successful week! Now I’m just waiting for the foam and fabric to arrive for my headboard project! I also need to swap out the reading lights, build nightstand ledges, and sew the bolster pillow using the extra twin-sized quilt. Lastly I’d still like to figure out how to paint the vinyl windows!

**Disclosure** Blindster.com provided the roman shades to me for this project. I was not paid and this post gives my 100% honest opinion about a company and product that I love.