This DIY Stone Veneer on House Exterior is a project that my dad and I did that we are both very proud of.

This is my parents house. A big house, that’s gorgeous on the inside, but is seriously lacking on the outside. Just before my parents bought it the bank had the whole house covered in this siding. Nothing is wrong with the siding, but it needs some color, some stone, maybe some cedar shakes or board and batten. It’s also going to be getting two beautiful columns to “hold up” the porch. 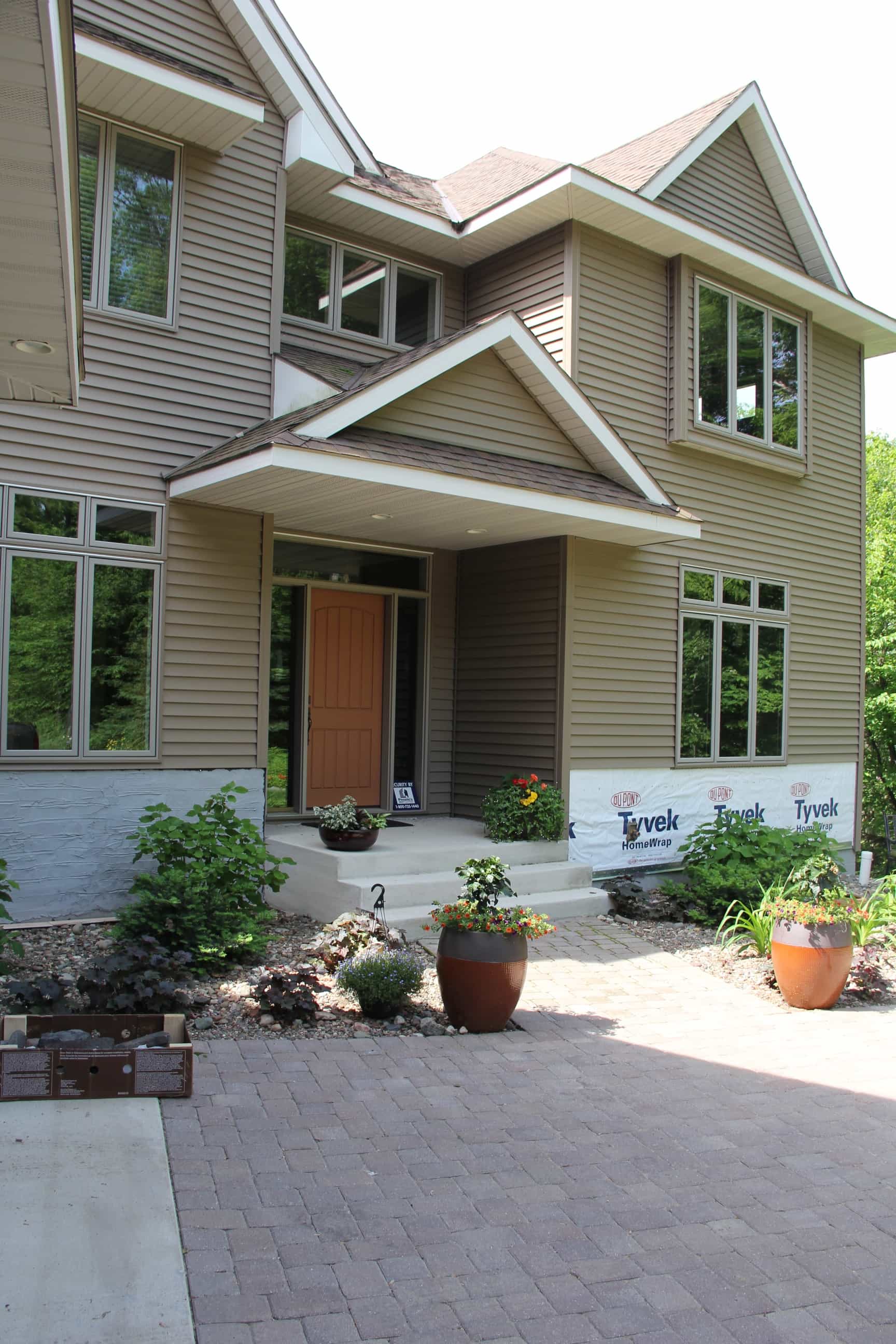 Last week my dad asked if I would come to MN and help him “rock the house”. See this isn’t our first go-around with rock. We’ve also done two fireplaces together and in college I helped him add rock to their entire lake house. 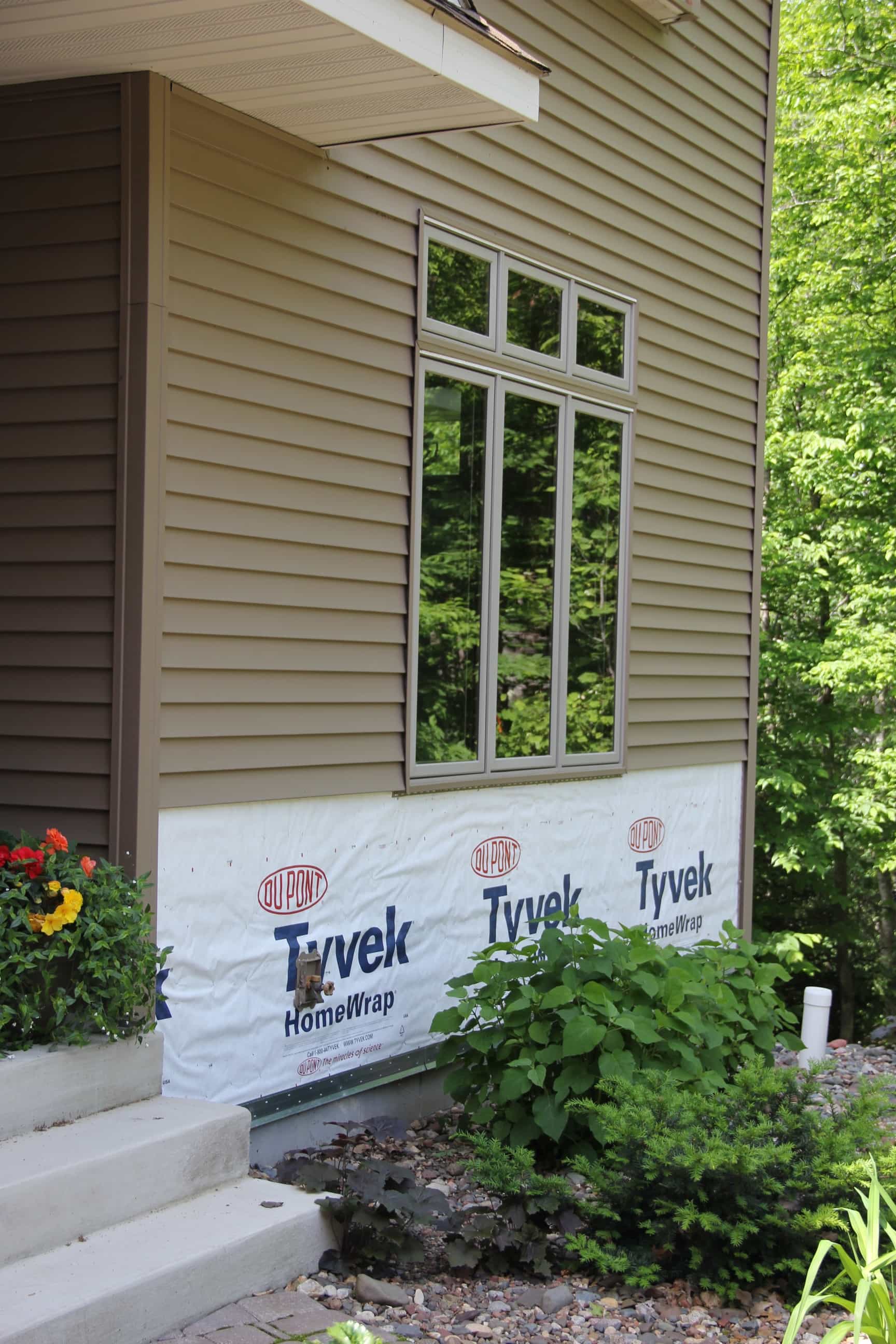 First of all we removed the siding. My dad actually had a slip up with the knife and ended up cutting his arm and making a trip to the ER for 5 stitches during this stage. Thankfully he is healing up fine, and we all learned the lesson of “cutting away from yourself”. 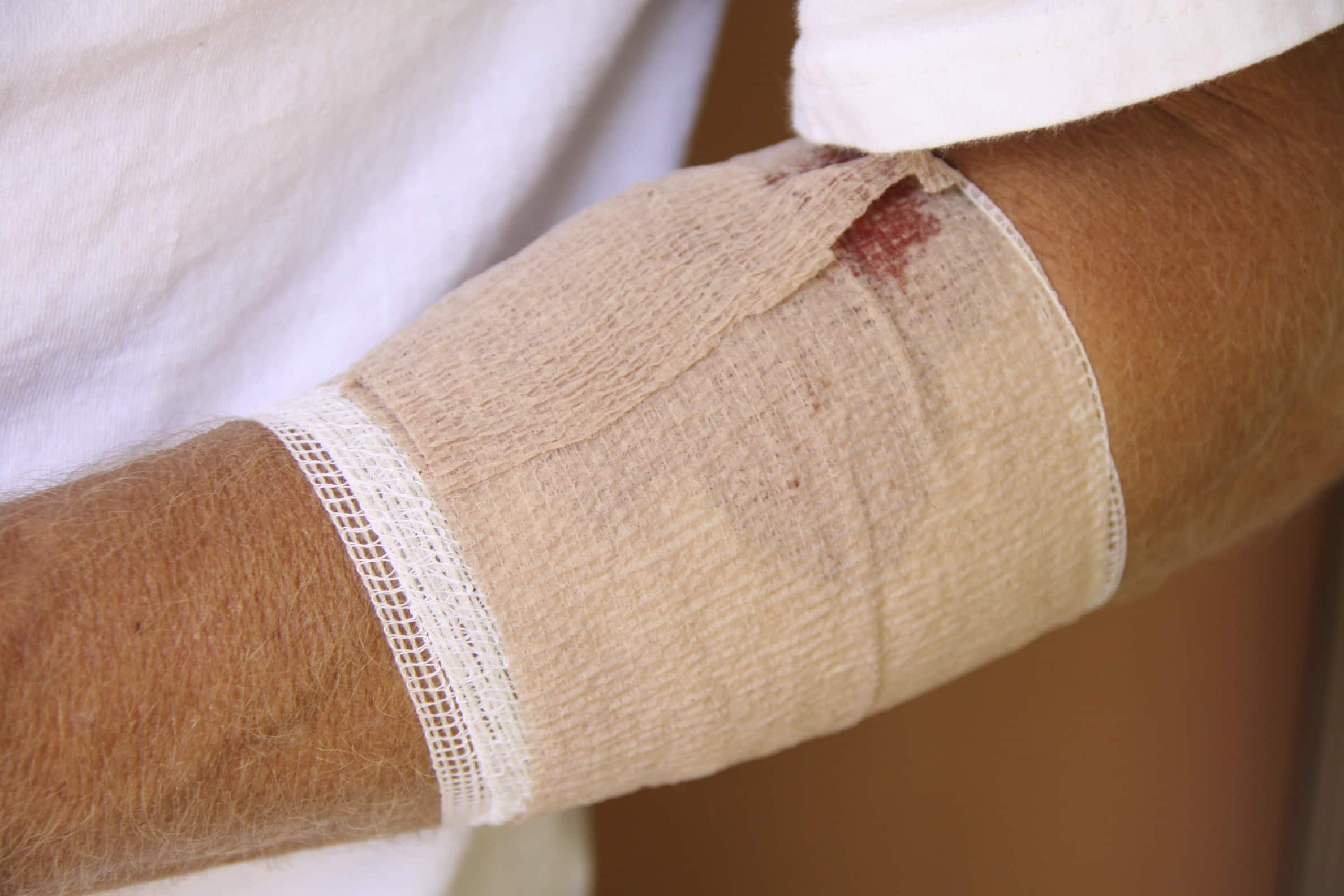 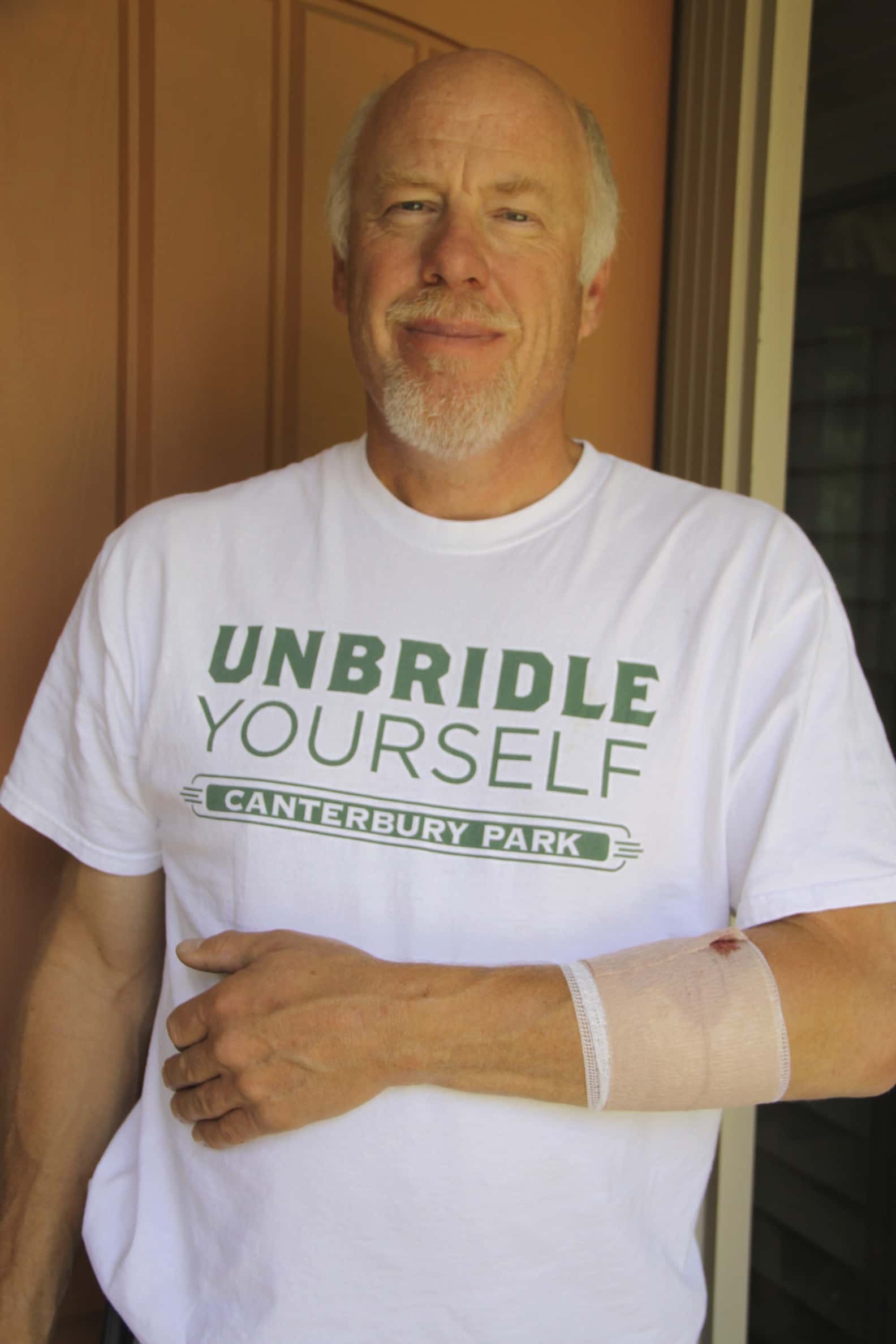 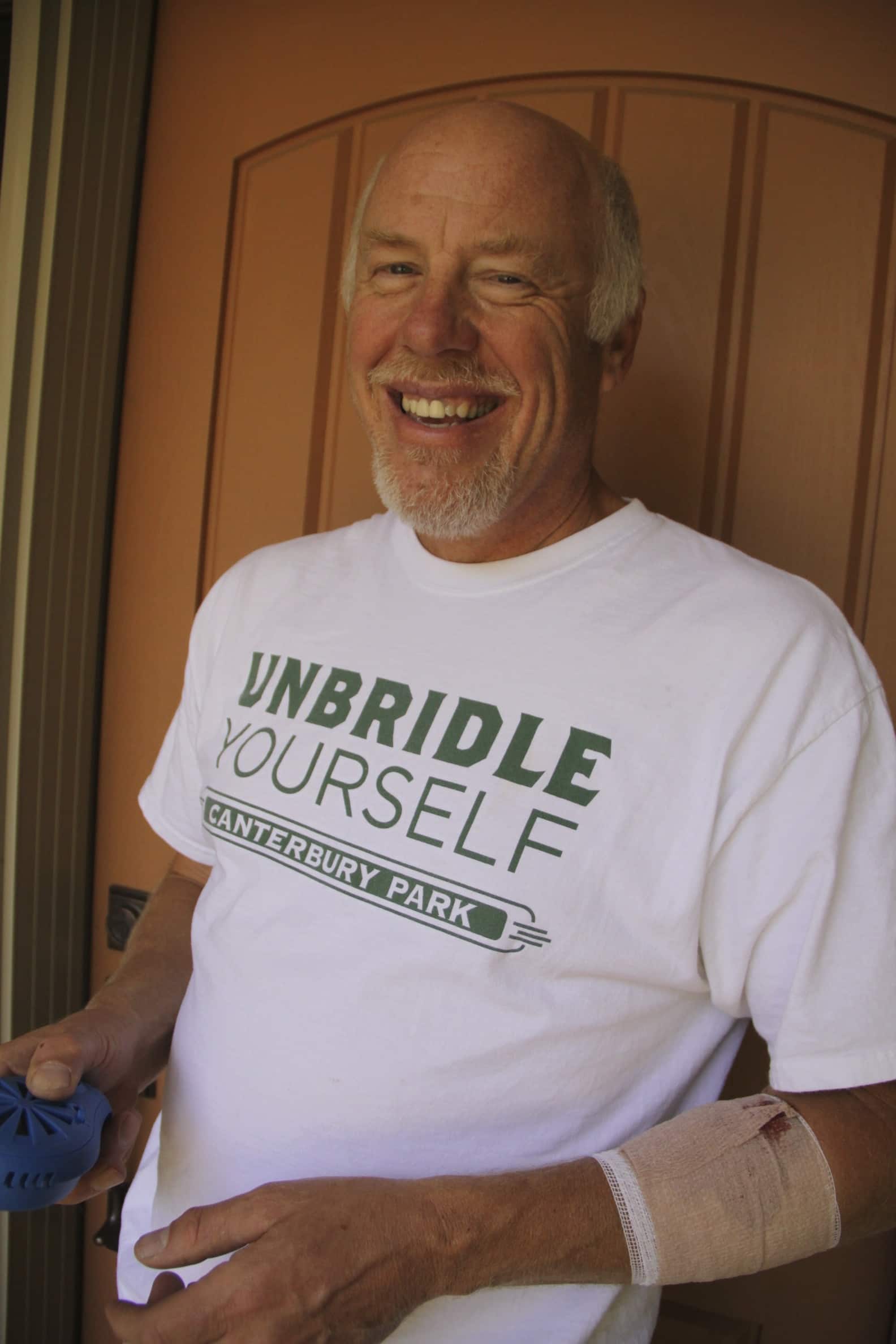 After the ER, we got back to work and our next step after removing the siding was to add a layer of building felt with staples. Then we nailed on chicken wire using LOTS of nails, and screws into the cement block. 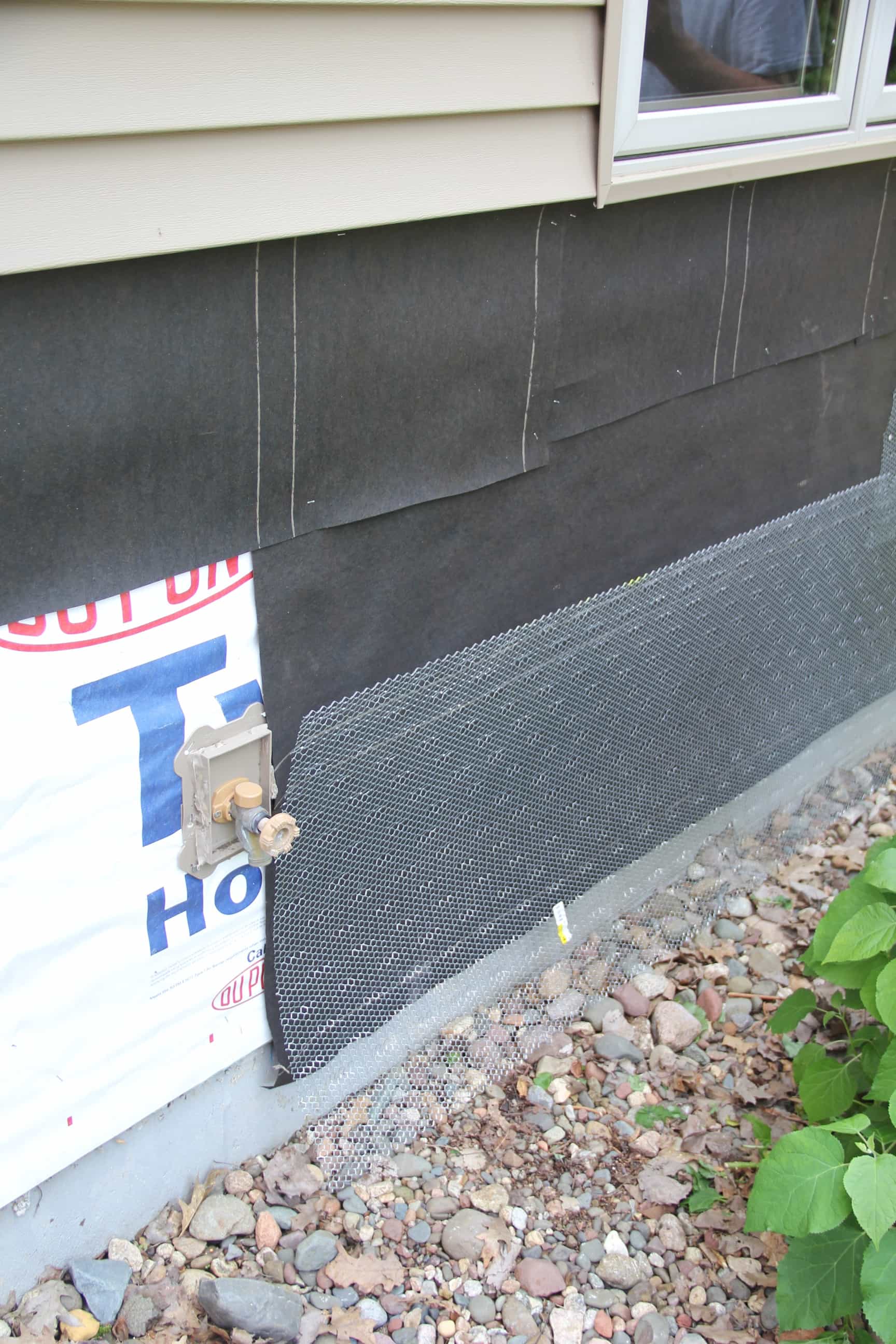 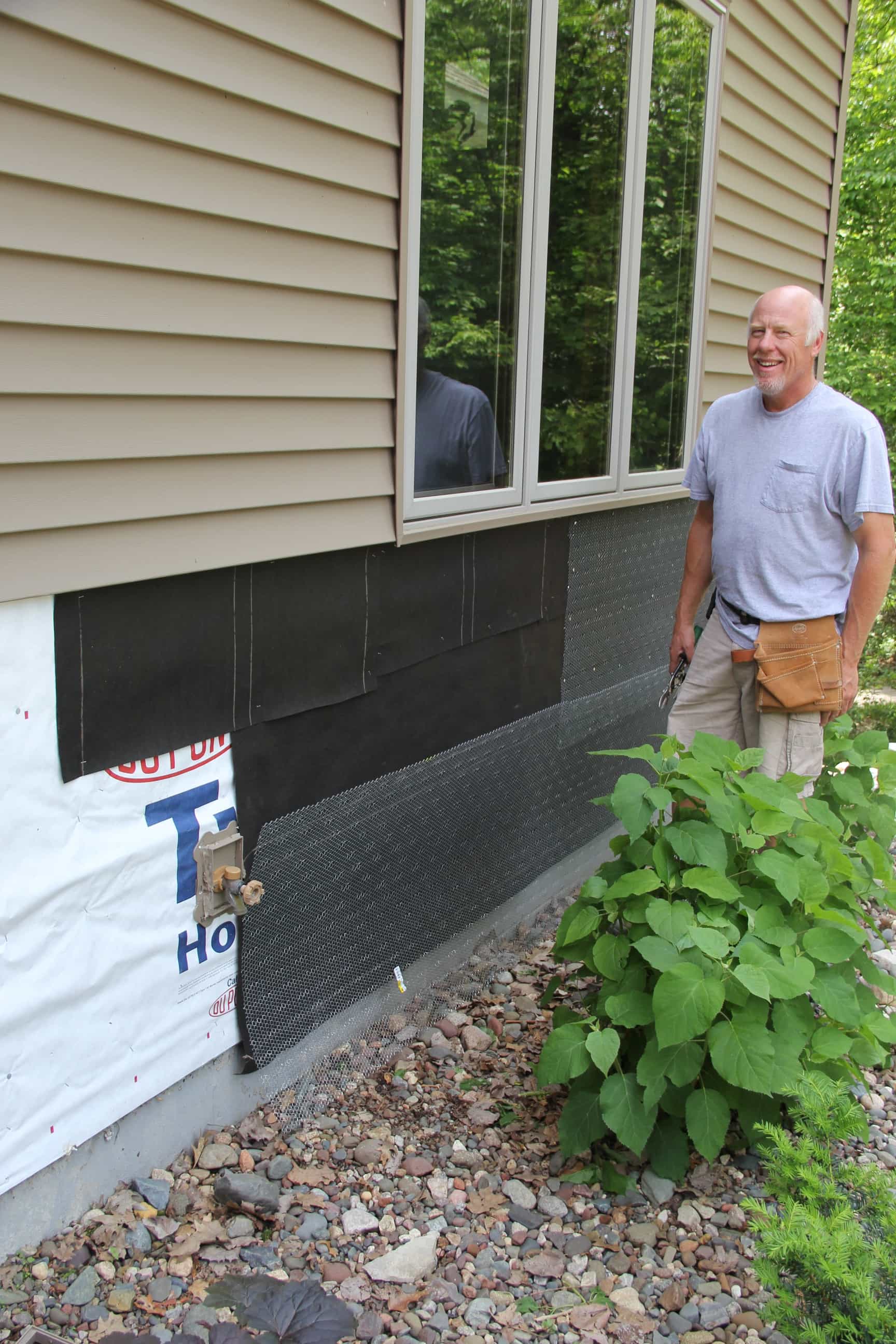 Next we used cement to create a “scratch coat” for the rock to adhere to. We learned by scoring lines in the scratch coat that it helped the rock stick even better. 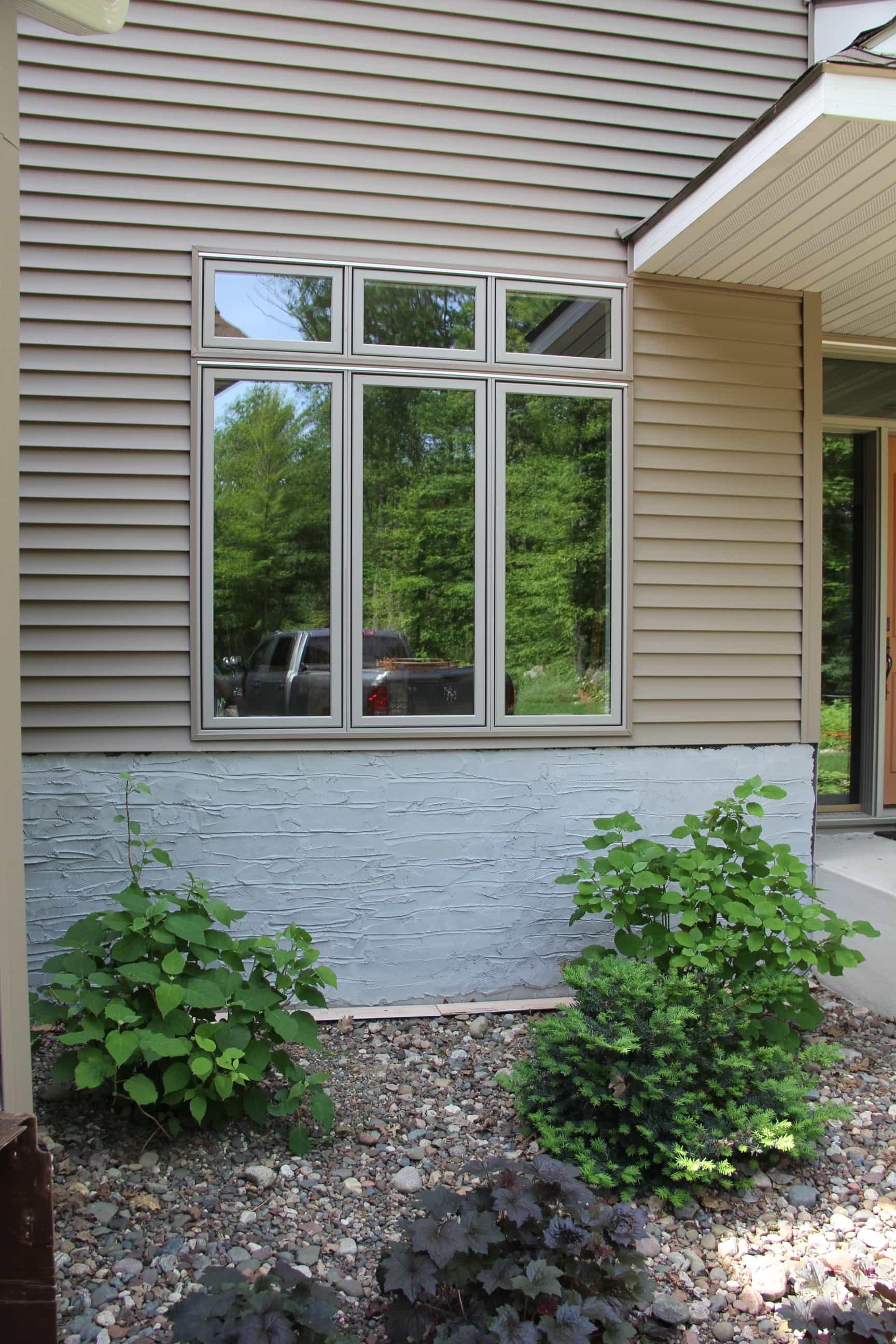 We used cultured stone for this project and I started by opening about 8 boxes so I had a big variety to work from. 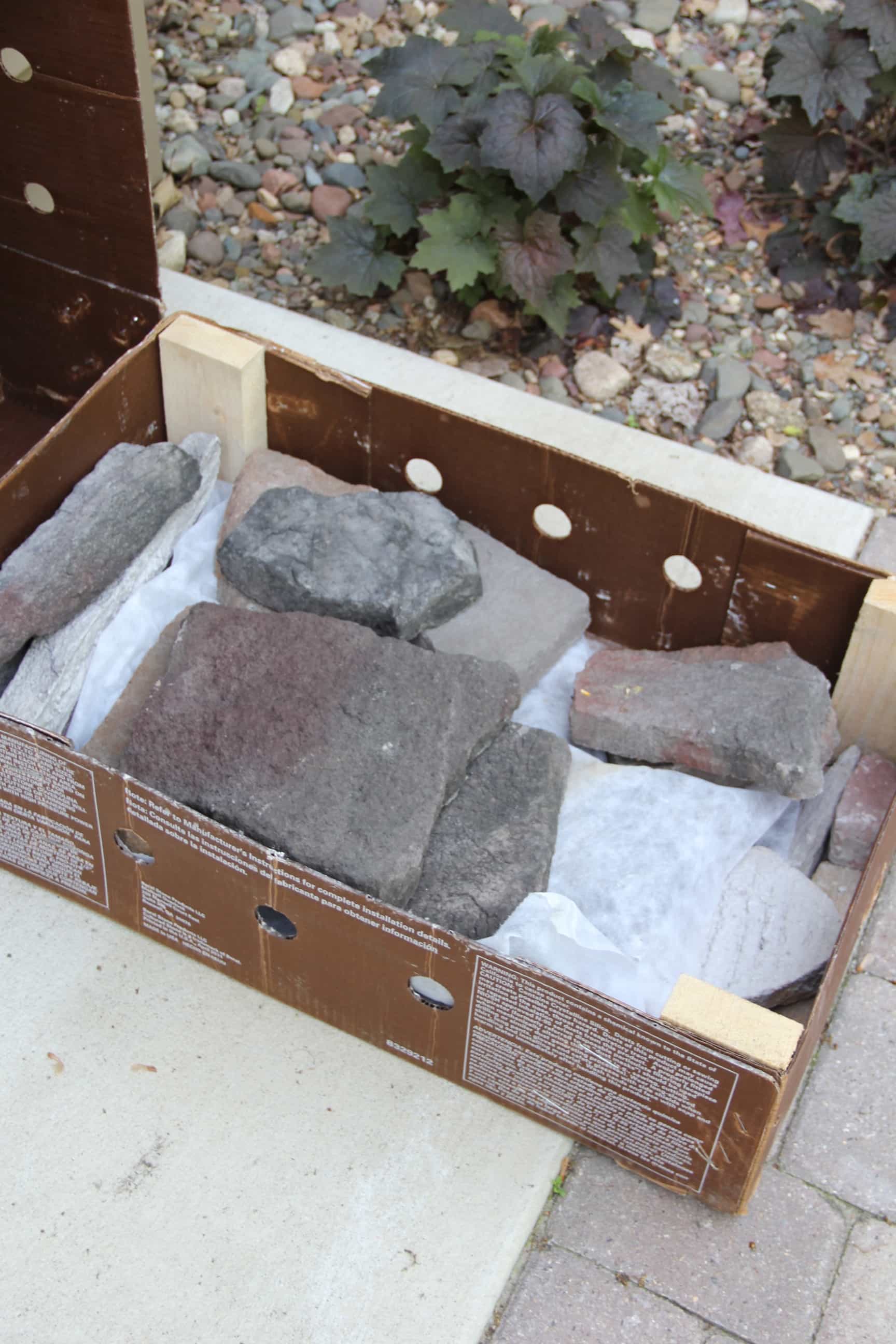 On the ground I marked off a space the size of the wall I was going to be rocking. I spent about 3 hours working on laying out all the rock for my first section. 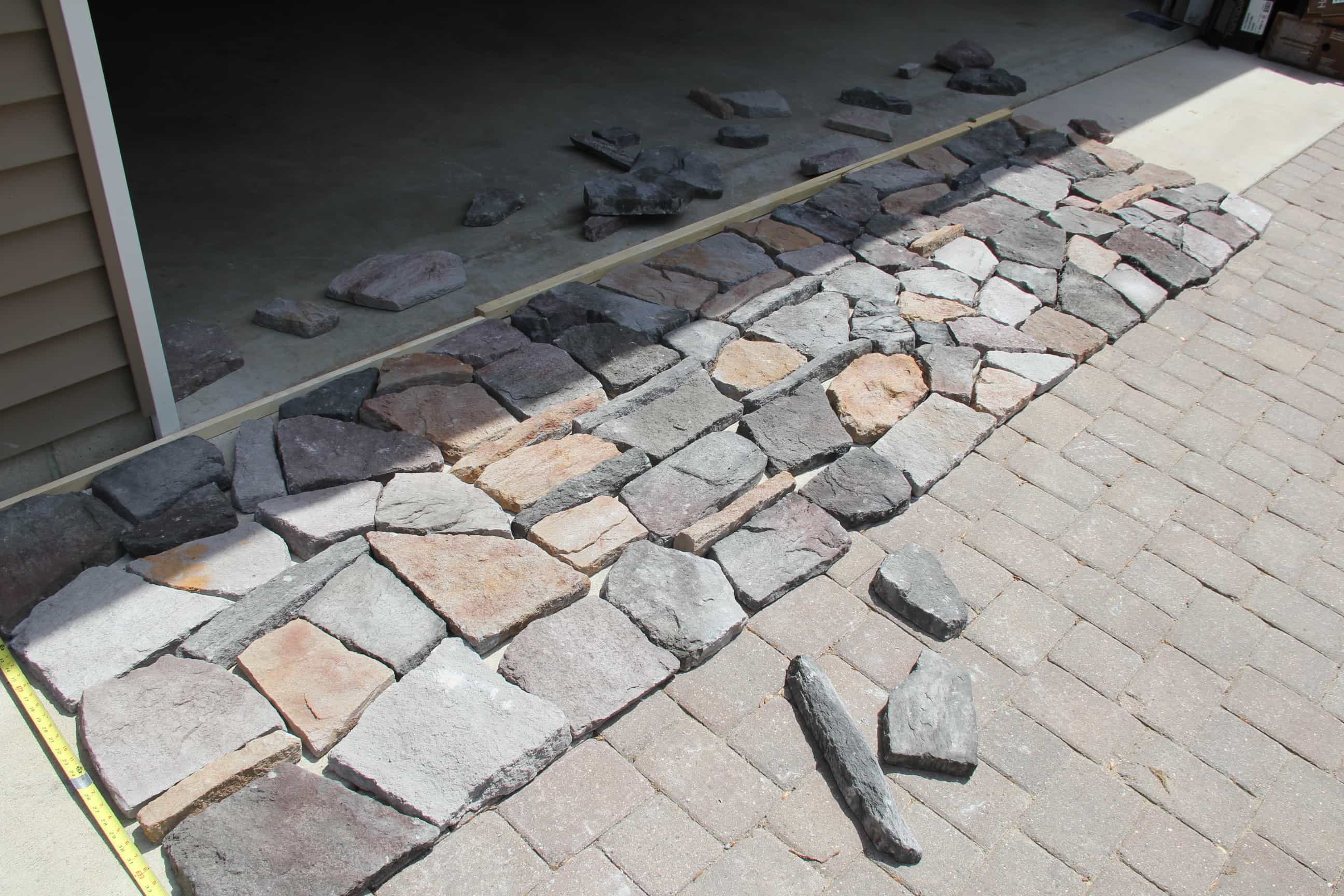 Then I laid pieces of trim on the ground for a level. Then I just started attaching the rocks to the wall using cement. At the end of day 1 this is where i was at. 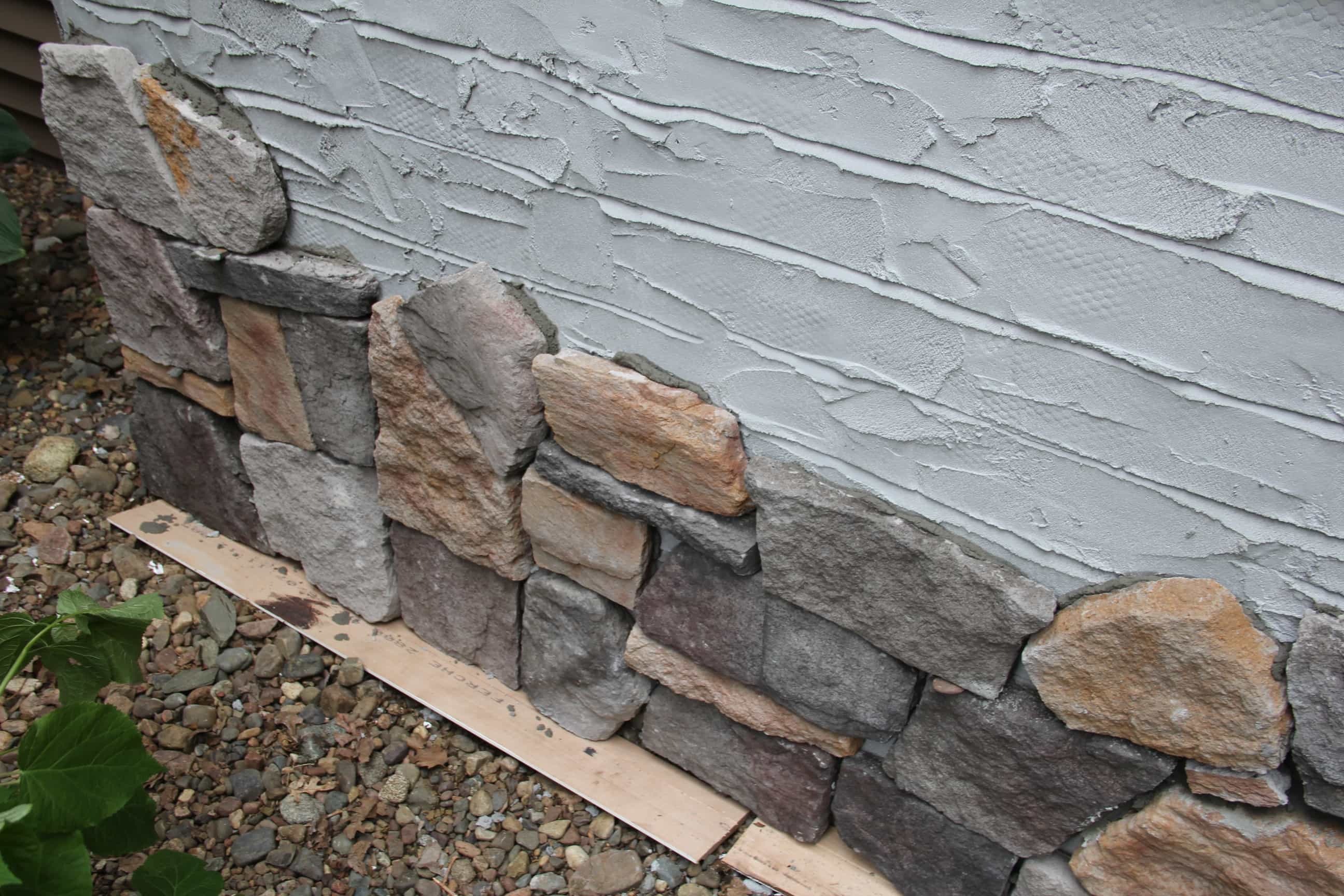 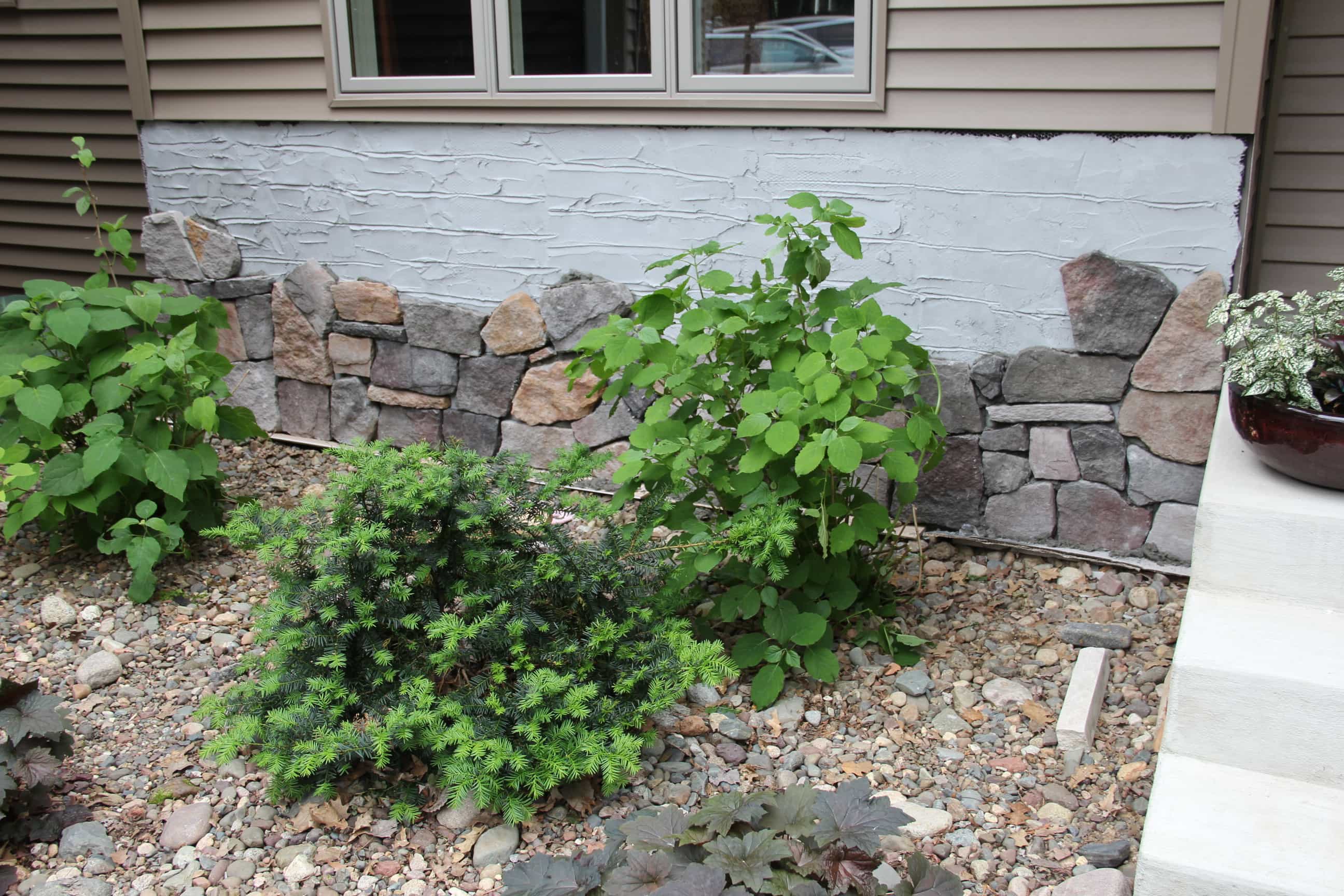 Thankfully after the injury my brother in law Brian stepped in and was able to work along side me. We joked that he was my “Masonry Apprentice”, but the truth was after a few hours of rocking he was just as good at it as I was after a few projects worth of experience. 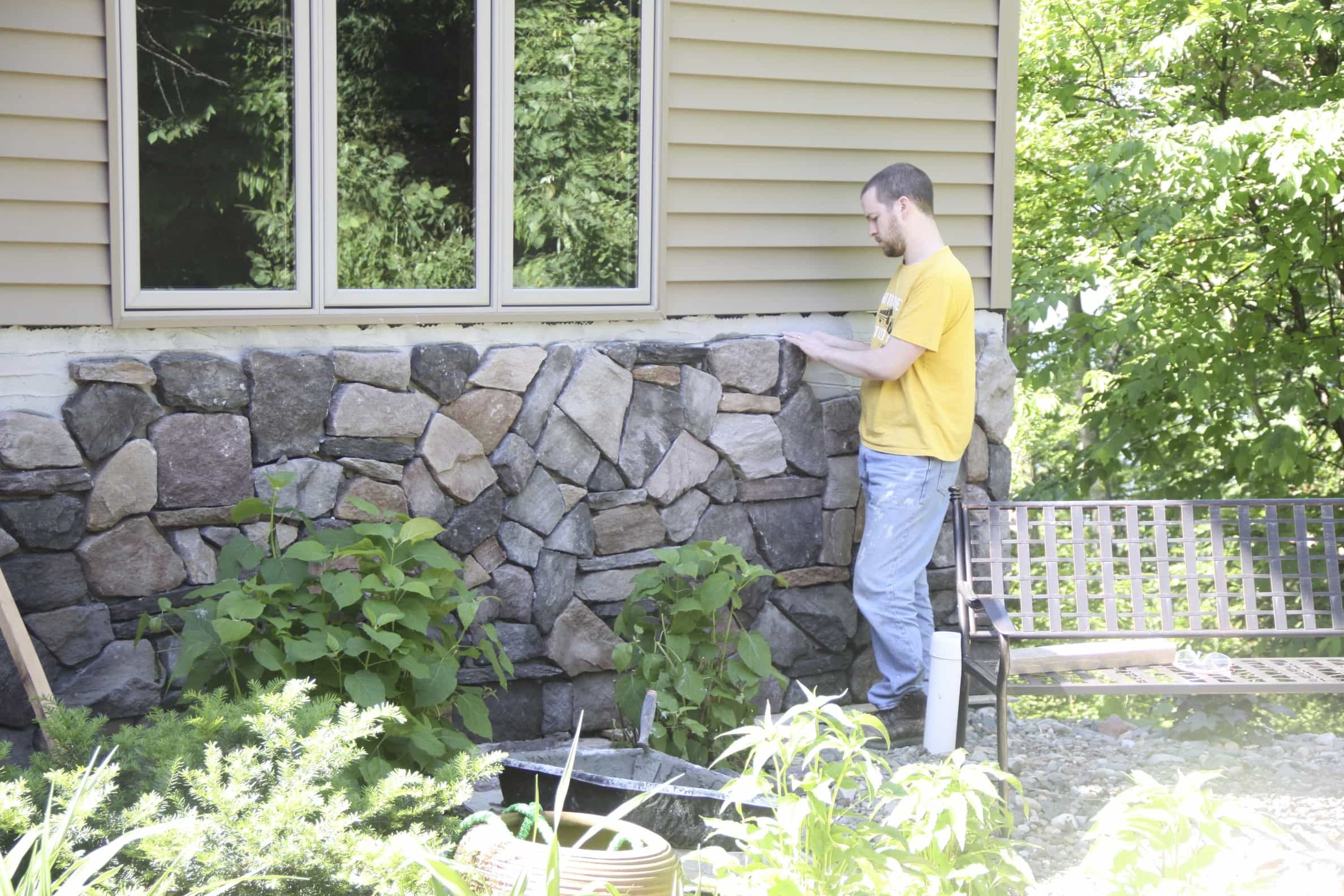 We were battling rain, mosquitoes, injury, and heat, but after 5 partial days of work here’s where we ended: 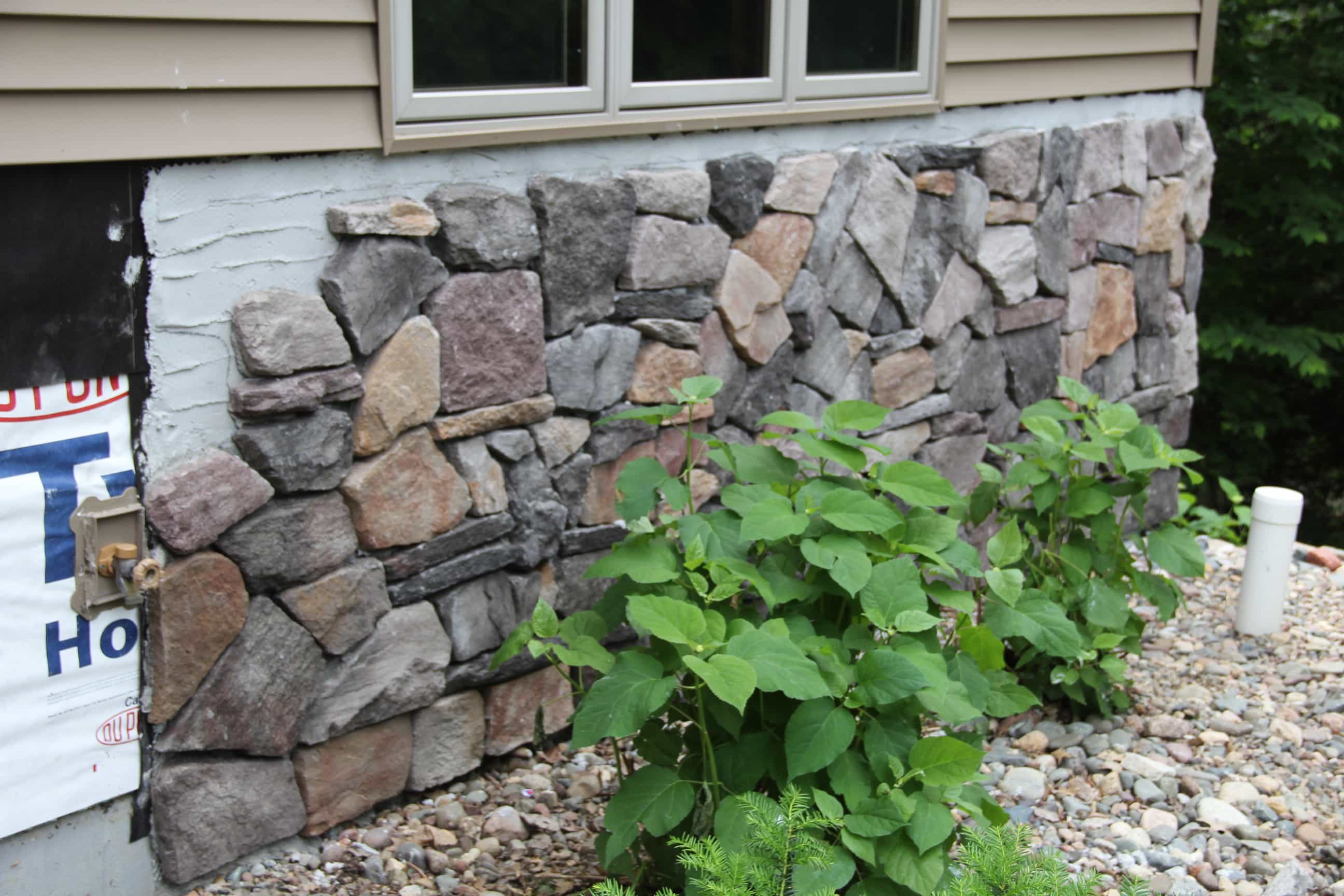 We still had to add the capstone piece and grout the rock. In order to leave space for the capstone we just marked the scratch coat so that we didn’t rock too high. 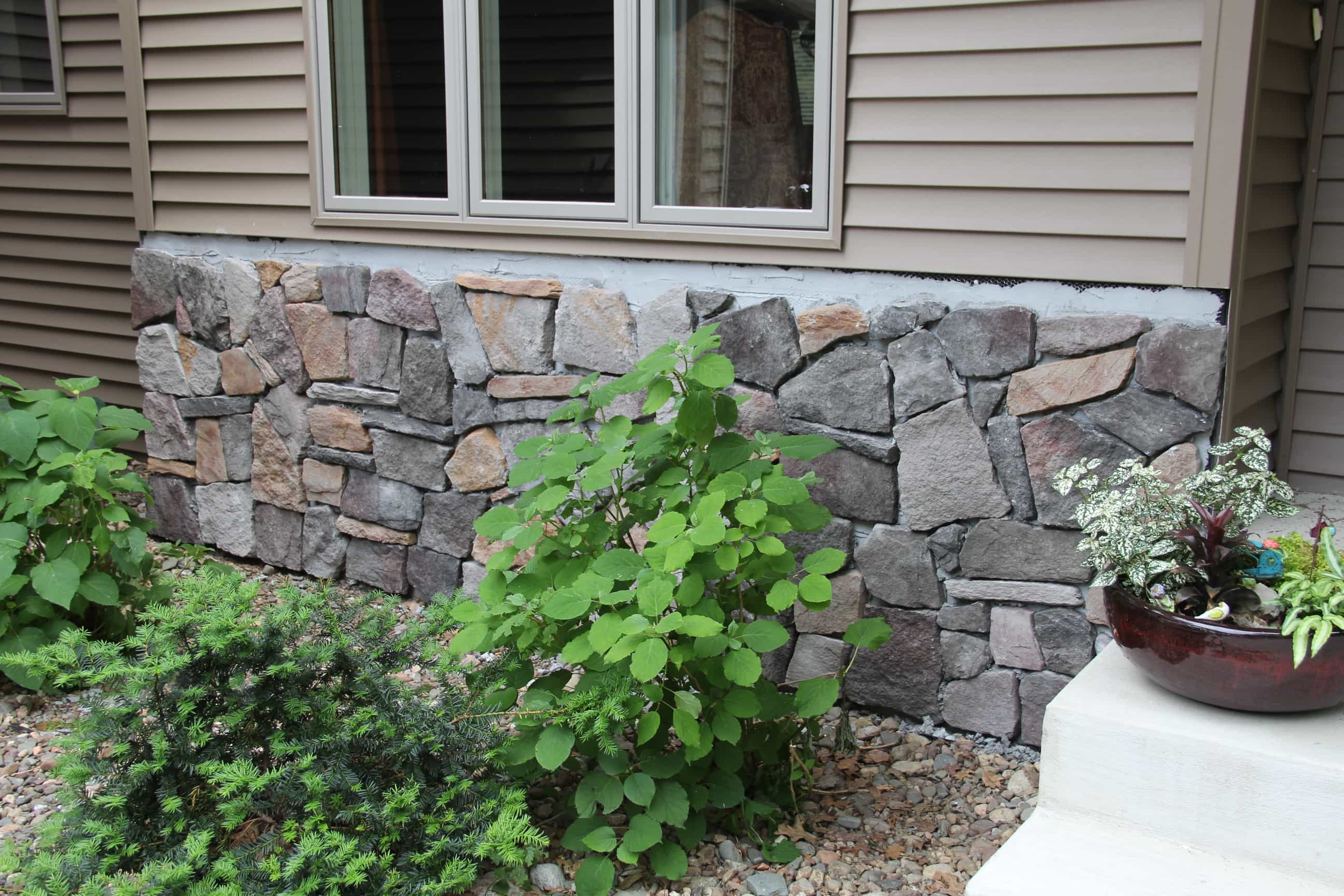 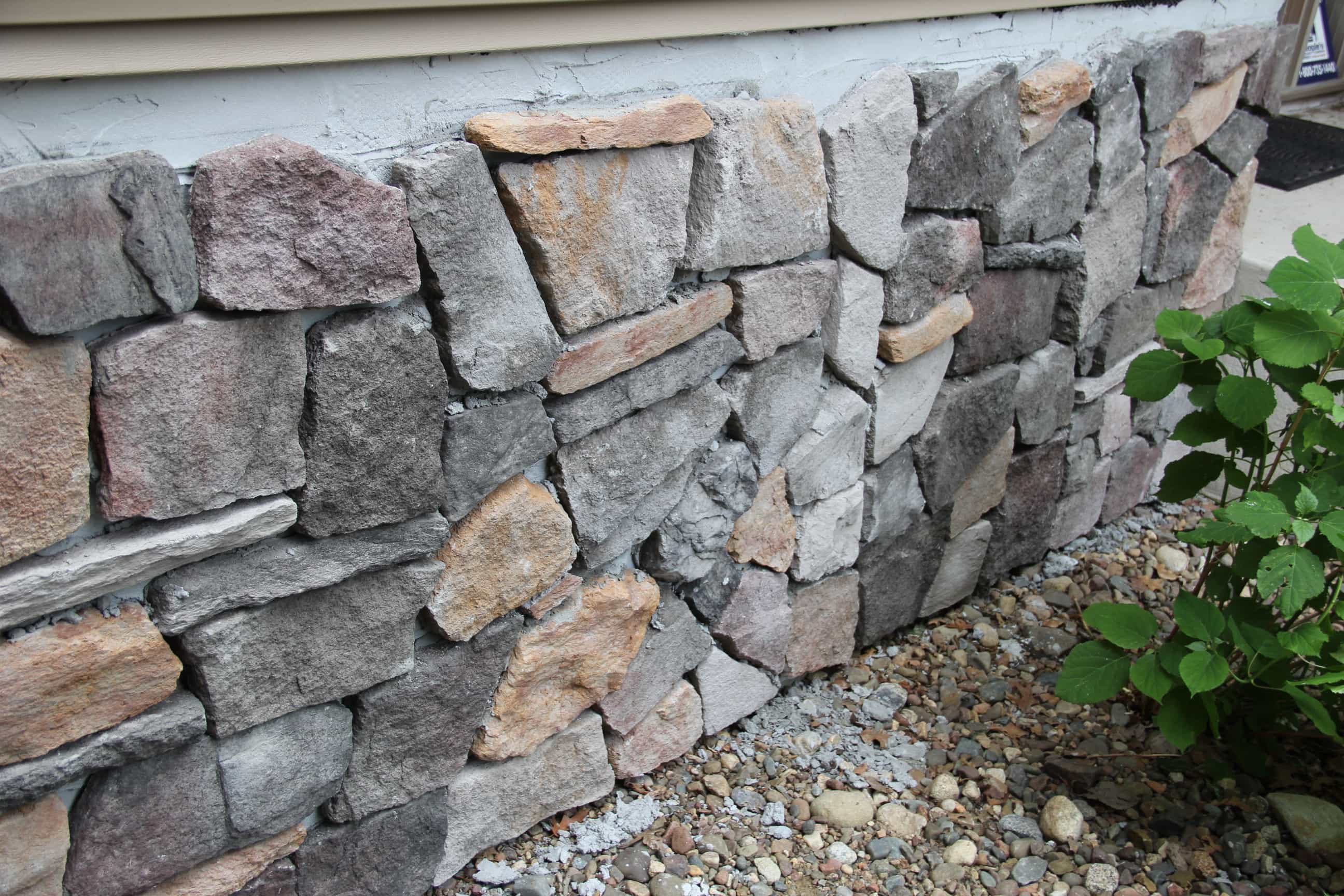 For between the garage doors we followed the same method, but we used corner pieces. 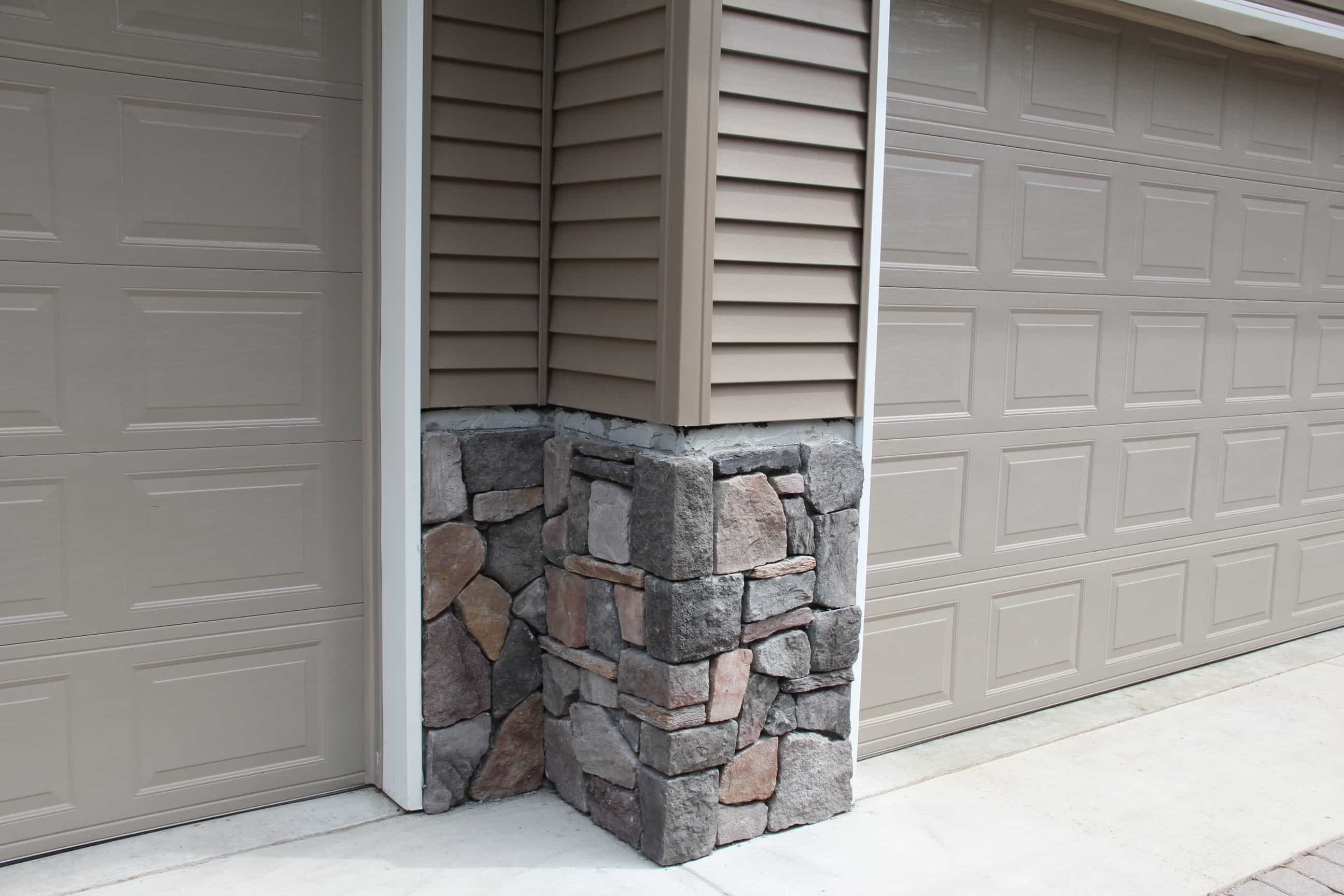 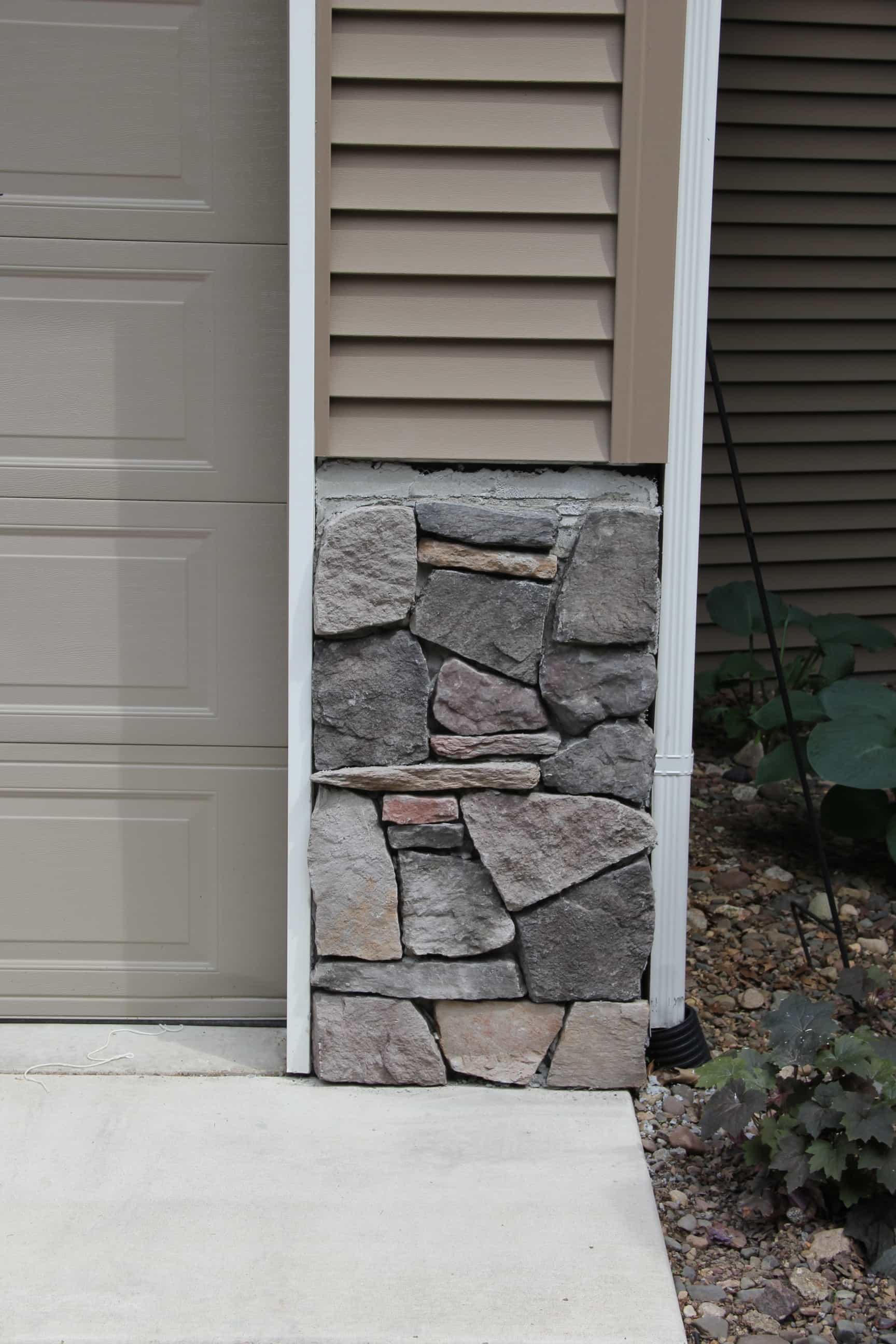 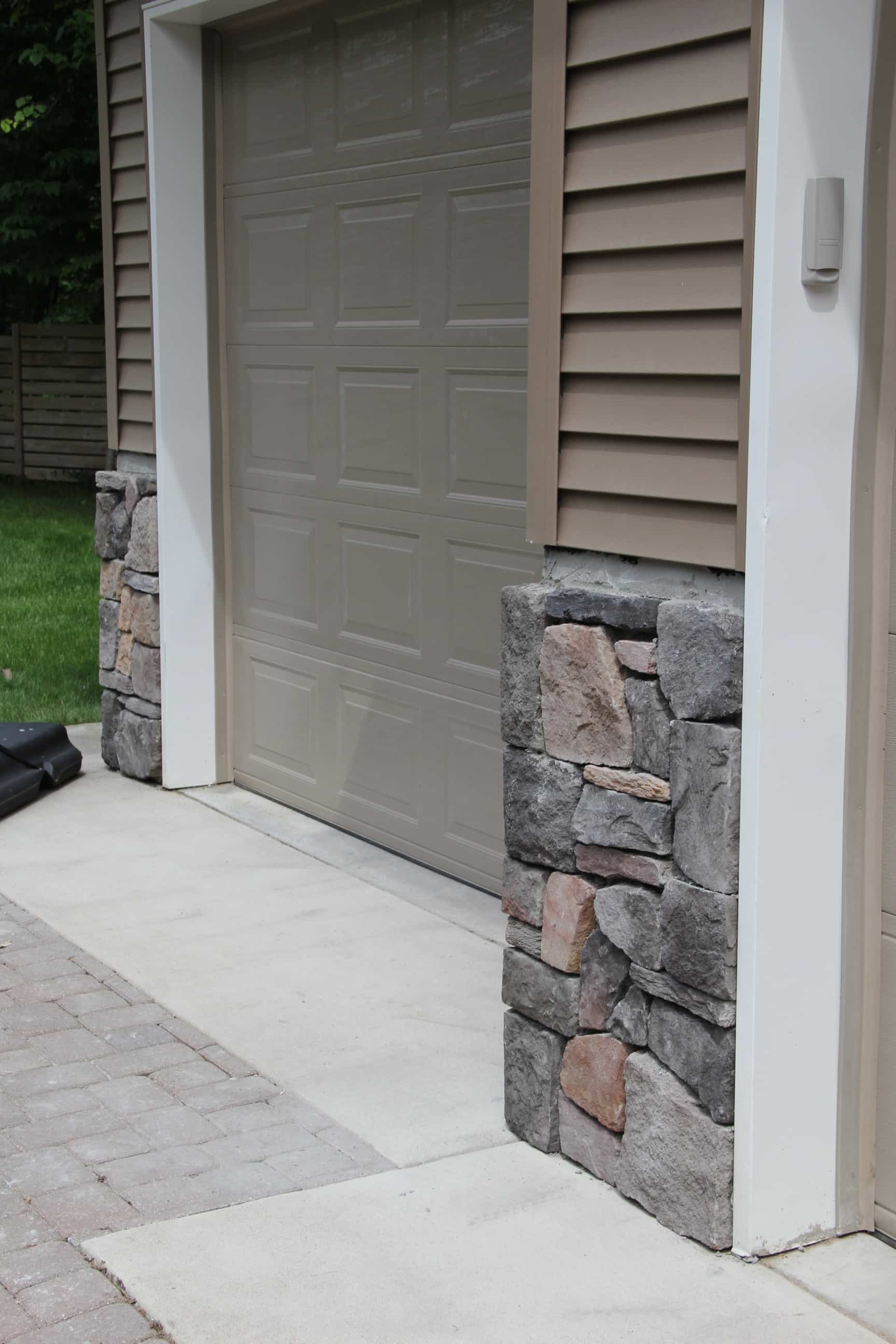 Now that the stone is on the house isn’t it looking better? Now imagine some color on the peaks, board and batten up the bump outs, and two thick beautiful columns. Won’t it be gorgeous? 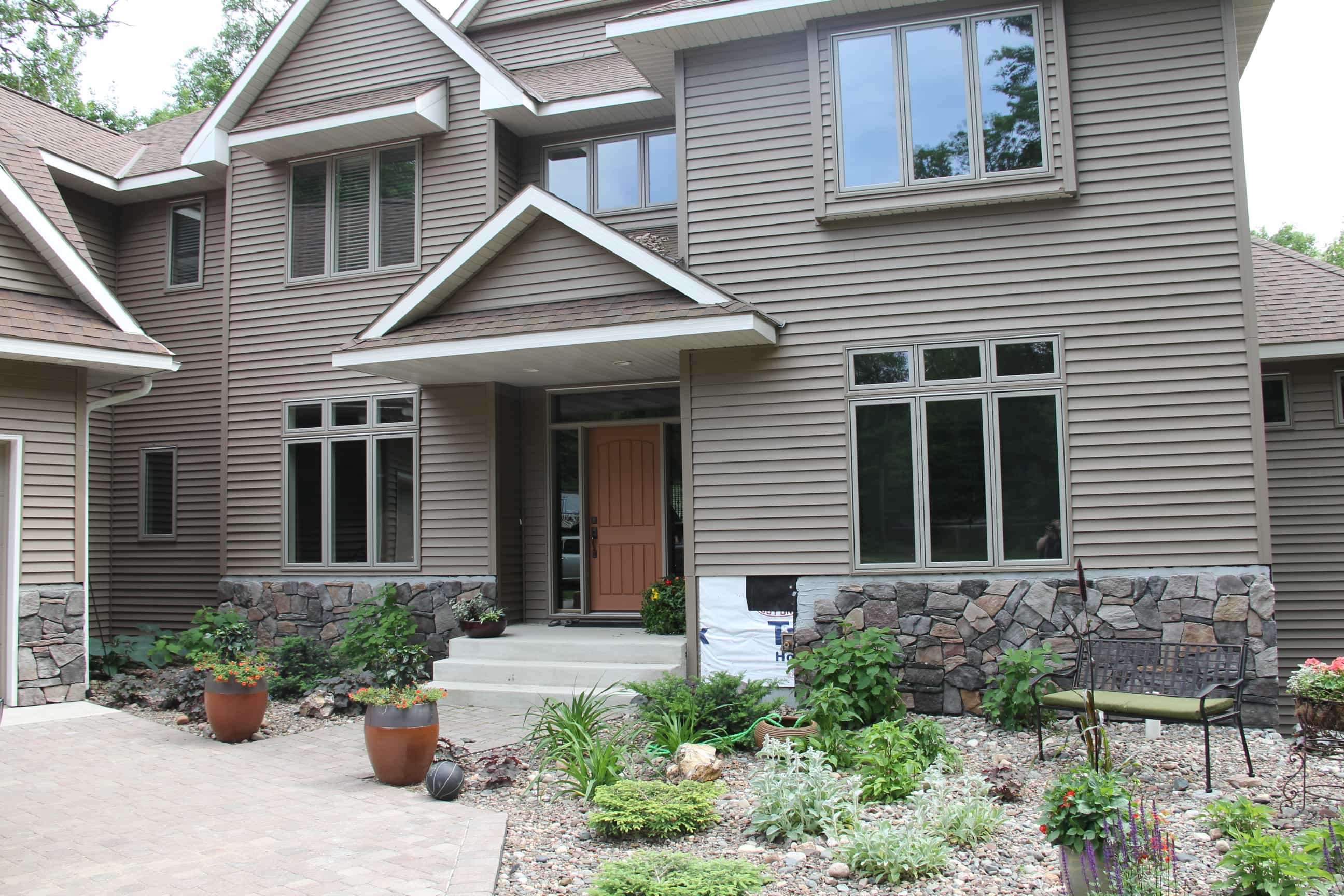 Even though it was a week of hard work, I was thankful to be able to spend this time working with my dad. The boys also thought it was the best week ever with grandma, so it was a great week for everyone! 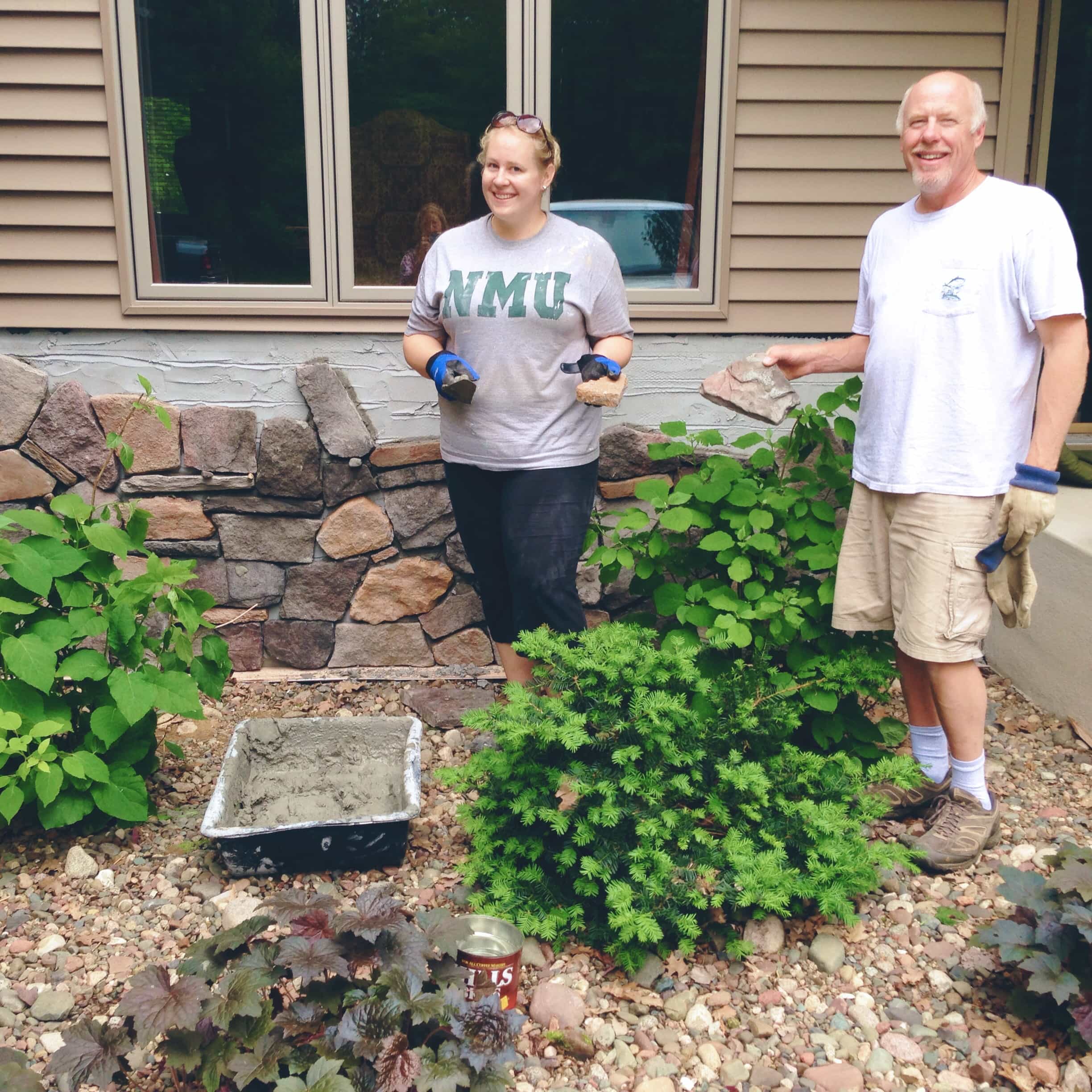 Once I was back in ND my dad was left to finish the job and just this morning he text me this picture with the capstone on it! 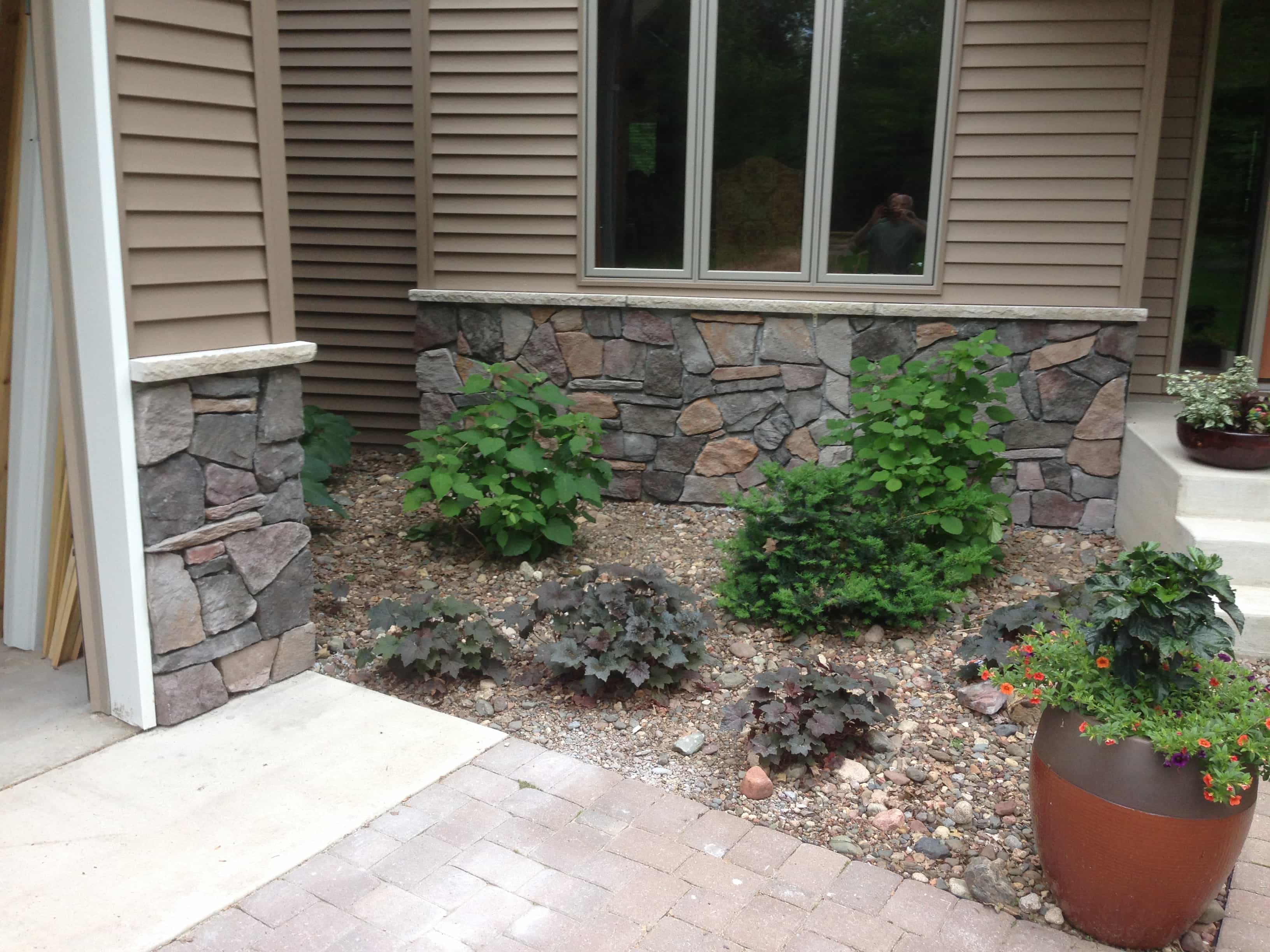