Last week my dear friend Bek text me asking if I had any ideas for her curb appeal on a budget. Over the course of the night we sent SO many texts back and forth which eventually evolved into us doing a $100, three hour overhaul! Today I’m sharing how we gave her house affordable curb appeal. 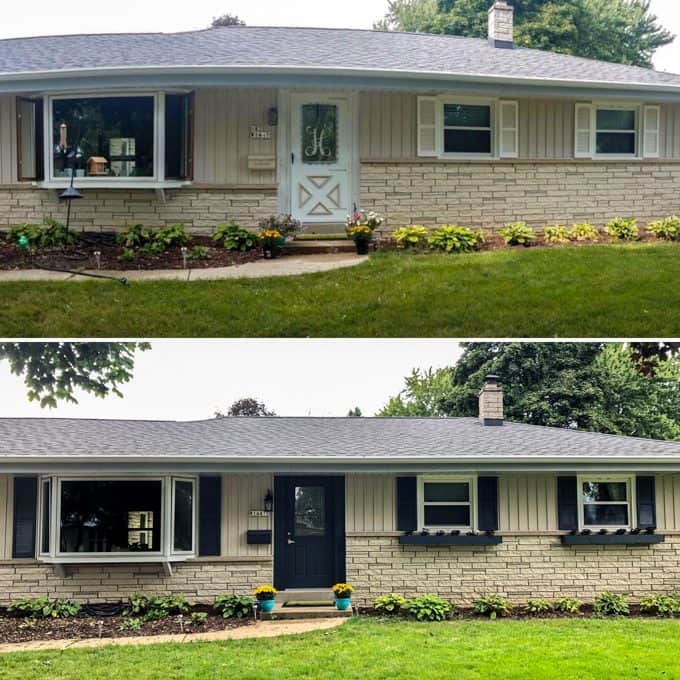 This is how her house started. It wasn’t bad, but it also didn’t have much curb appeal. The shutters were dingy, the light was dated, and they didn’t even have a screen in the screen door. 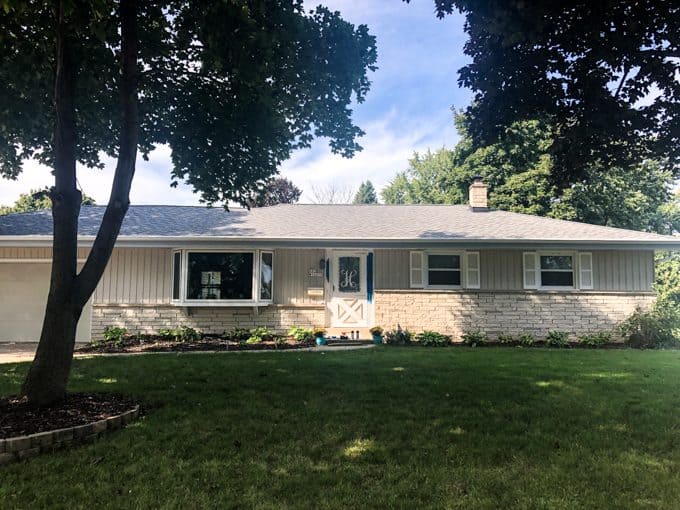 We decided to add window boxes, replace the light fixture, add shutters to the bay window, and spray paint all the accents. We were on a tight timeline of 3 hours while her baby napped and before my kids got home from school! We even decided to do the entire project without telling her husband as a surprise! 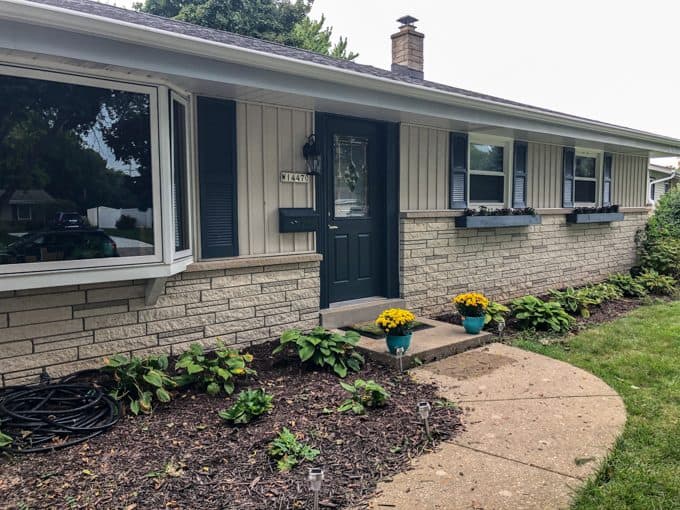 We purchased shutters for the bay window at Menards for $35. Then we removed her old shutters using an electric drill and gave them a good cleaning using a hose and rag. Thankfully it was sunny outside and they dried quickly. One tip to note is that we left the screws in the shutters so that they would get a coat of paint as well. While they were drying we removed the old screen door, the mailbox, and the light fixture. 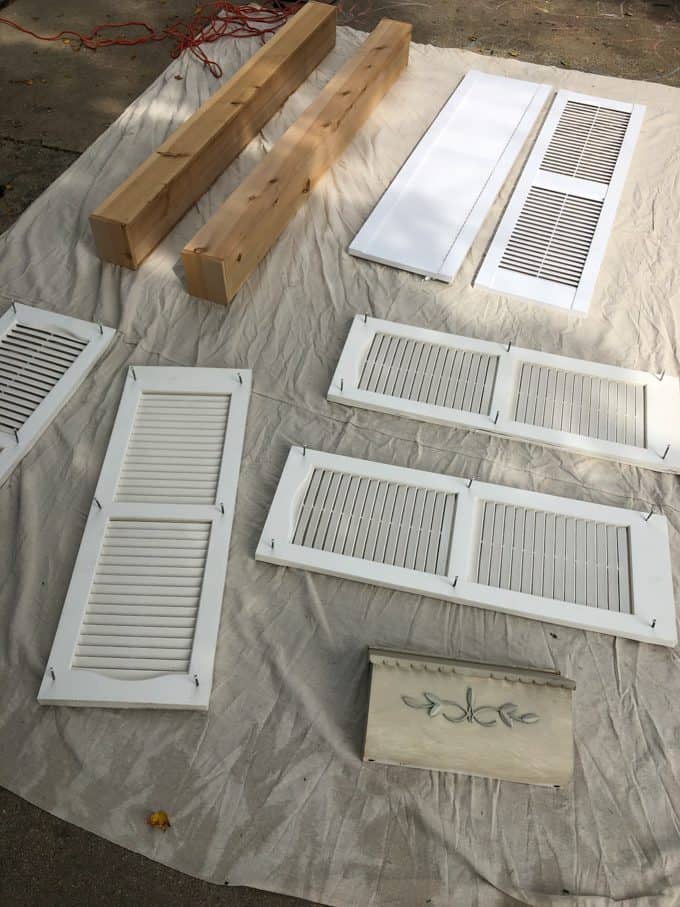 Earlier that morning I used cedar fence pickets to build two 6′ planter boxes. I used 7 boards total at $2.29 per board totaling $16.03 plus 13 mums on clearance for $1 each. 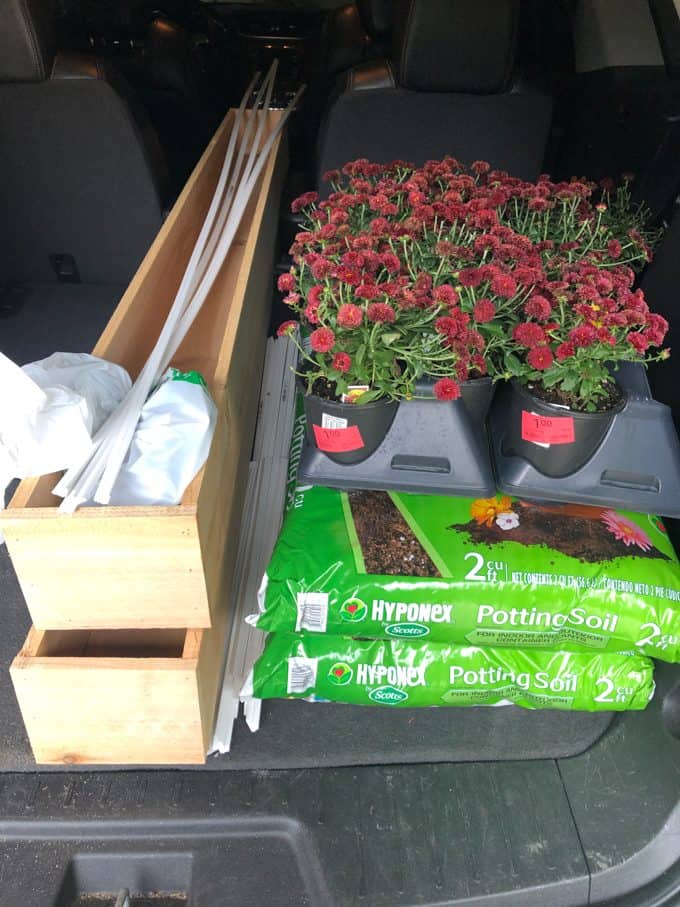 I used my trusty Graco Truecoat 360 to spray everything with Valspar Sooty Lashes in Satin. We sprayed two light coats and it covered great and dried quickly in the sun. 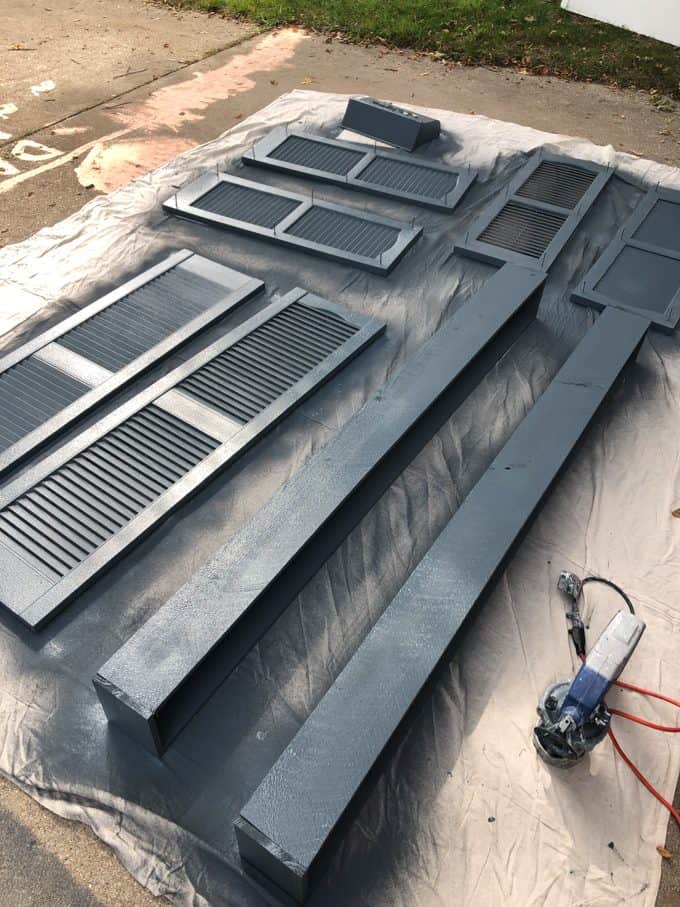 To paint the door we taped off everything with painter’s tape and plastic drop cloths. Honestly this may have been the most time consuming part! I’ve painted MANY front doors but this was the first time I’ve ever sprayed one and I’m never going back! It was so quick and didn’t show any brush strokes! We painted the trim along the sides of the door to give it a bit more presence. 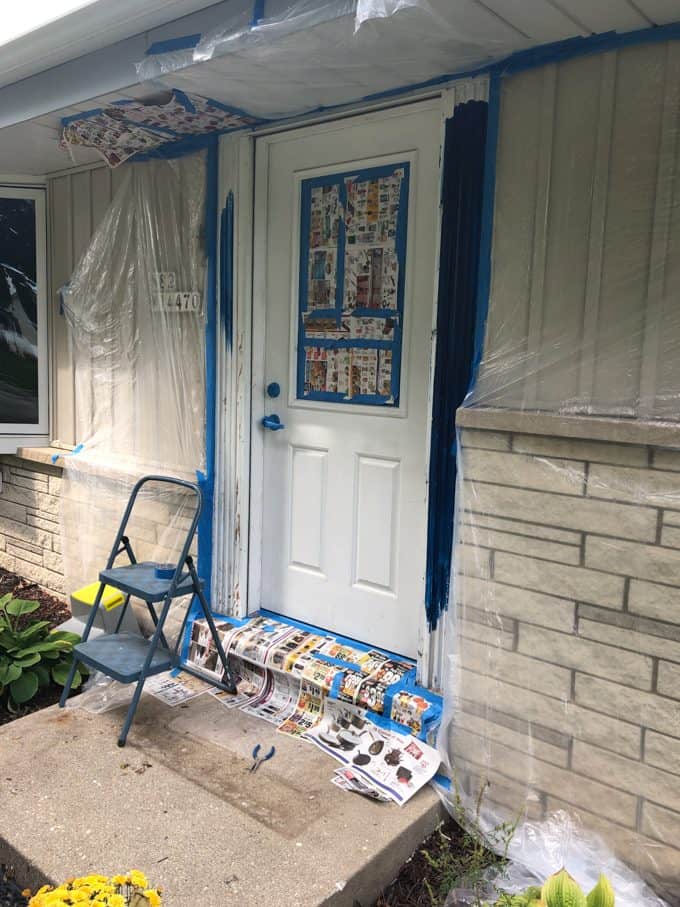 While the paint was drying I used 6 angle brackets and secured them to the house using 2″ Tapcon Masonry screws and their pro install kit. A few things to note are that an electric drill is important because drilling into cement will cruise through batteries. Also I had a cup of water to dip my bit into to keep it from over heating. The hardware cost about $10. Then once the window boxes were dry we slipped them onto the brackets and secured them using wood screws from below. Then we added six mums per 6′ window box. 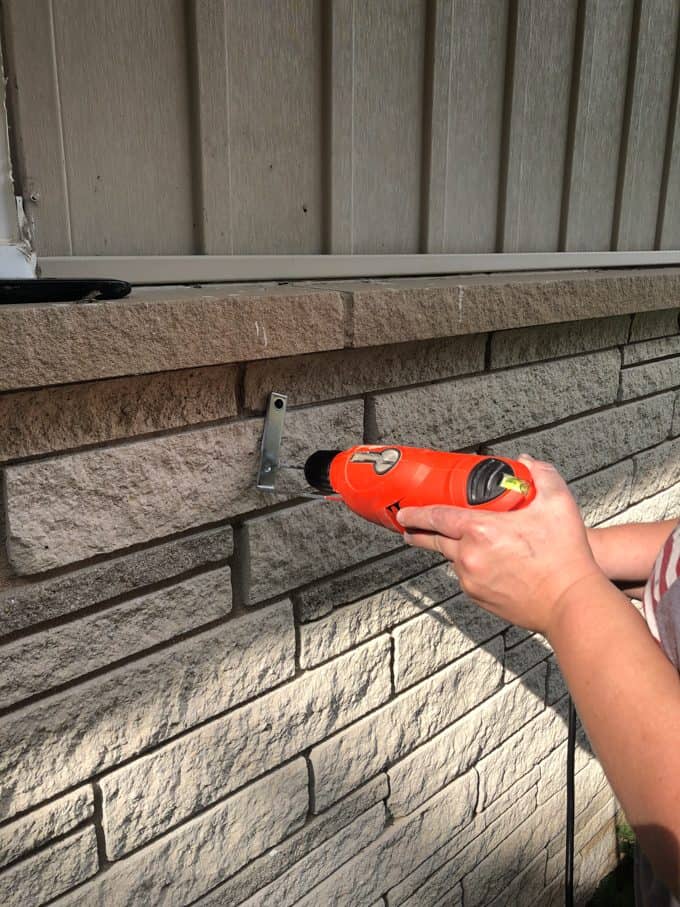 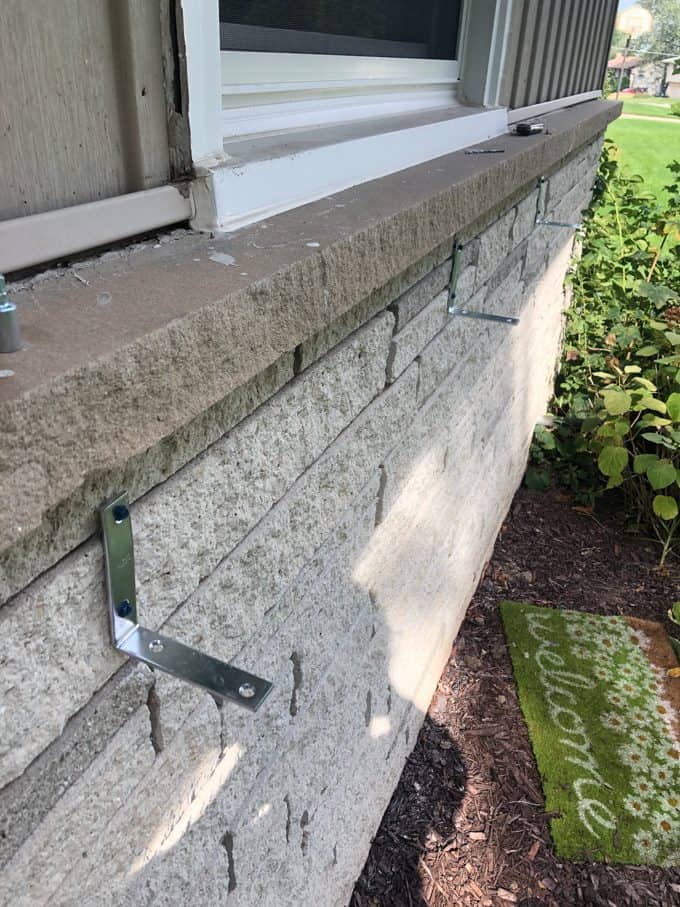 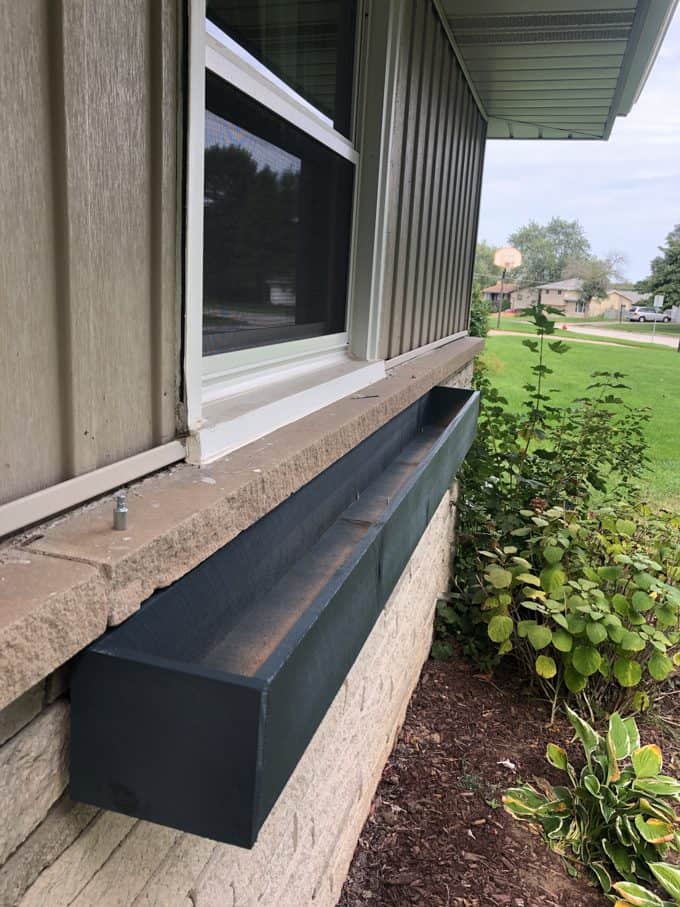 I replaced the dated light fixture with this one that Bek had found super cheap on Facebook Marketplace a long time ago. I’m factoring in $15 for the fixture.

Once the shutters were dry we installed them back up using an electric drill. Because we were on a serious time crunch I was cautious not to touch them much because they were still a bit tacky. Once they were in place we used a brush to touch up anywhere that needed it. 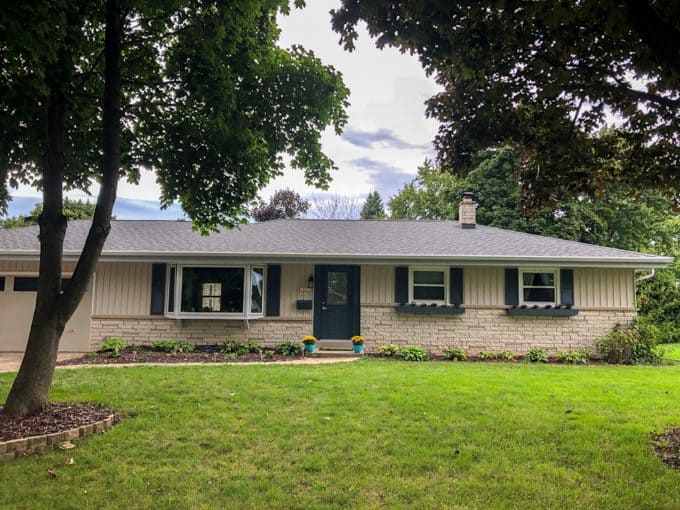 As the three hour mark hit we were literally cleaning up and the baby woke up from his nap! Talk about good timing! The mail lady stopped and remarked about how impressed she was that we were doing this without any help from men!

So here’s the budget breakdown:

TOTAL- $106!!! So it’s $6 over budget. Also we spent the $13 on mums but I didn’t count that because the window boxes will be an annual expense. It definitely helped that I already owned the Tapcon install kit, the paint sprayer, the nail gun, etc. BUT… most people are happy to loan out tools like these so don’t let that keep you from tackling a project like this! I bet your neighbors would happily loan you the supplies to have your house turn out this nice! 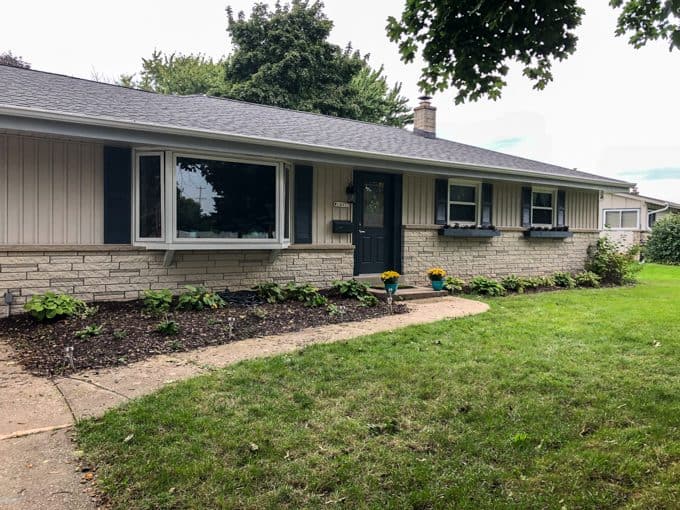 That night her husband got home from work in the dark and headed out early on his run the next morning. When he got back he was TOTALLY shocked and couldn’t believe everything we had accomplished! I absolutely love working on projects like this with friends and sharing the results with you all here! I hope that this post encouraged you that it doesn’t have to cost a ton to give your house affordable curb appeal! Thanks so much for reading!